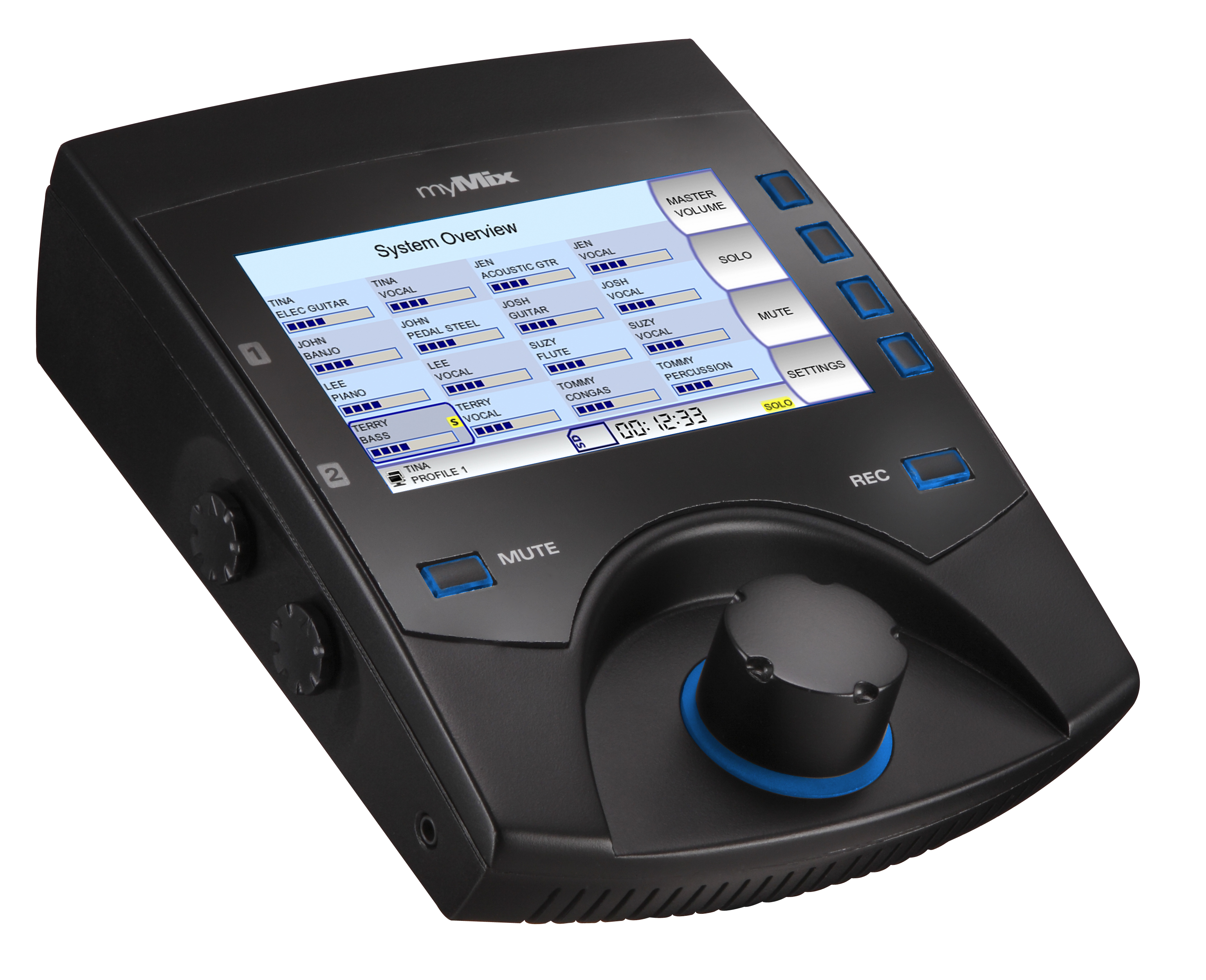 In this feature we’re going to be taking a look at some of the benefits of using the myMix Personal Monitoring System. Personal monitoring allows each musician to set the levels of their own monitor mix, giving you control over the volume of each member of your band (as well as your own level) being sent to your headphones. Not only is this extremely portable system a fantastic tool for live performances, it’s also great for sessions in the studio too, as well as being ideal for situations where there’s no front of house or sound engineer, such as smaller venues, charity and youth events or fundraisers for example.

The myMix Personal Monitoring System provides numerous advantages for musicians, such as high-quality 24Bit/48kHz multi-track recording functions, standalone mode, Power over Ethernet (PoE), muting and soloing, as well as onboard effects and tone control for each track. There are also several other unique features that make it an incredibly flexible and useful solution for performing arts shows, audio installations and for use as an communications system. For this article though, we’ll be looking specifically at how bands can make use of the myMix system to help in rehearsals, recording sessions and for playing live.

The main part of any myMix system is the myMix Personal Monitor Mixer. This is the device that each musician plugs their instrument (and/or mic) and headphones into, giving them control over the amount they hear of their band-mates. Each monitor mixer has a pair of mic/line inputs, as well as a pair of line outputs, meaning that you can also use it to feed a mix to a pair of on-stage monitor wedges or even a PA system, acting as a traditional live mixing desk. Designed to be intuitive and user-friendly, it’s operated via a set of buttons and a large multi-function control dial, used for scrolling between and selecting the different features displayed on the large, easy to navigate colour screen.

Once each member of the band is plugged into their monitor mixer (more on how to connect later), they’re then able to make changes to how they hear their band-mates. If the bass player wants to hear more of the vocals and less of the drums in her headphone mix for example, she can change the volumes of these channels easily from her personal monitor mixer. myMix also includes onboard reverb and delay/echo effects, as well as the ability to pan each channel, and a simple EQ/tone control, so you can really customise your mix to suit the occasion. You’re also able to name each channel, removing the need for masking tape or writing on the unit, and you can save your routing settings to an SD card for easy recall, so you won’t need to rename every channel each time you set up.

A really great feature of the monitor mixer is the ability to record and play back audio, meaning you can also use the device as a powerful practice or rehearsal tool. By recording a mix from a performance or rehearsal to an SD card, musicians have the ability to practice along to the recordings without the rest of the band being present. Since each track is recorded to its own separate file, you also have the ability to change the levels on your monitor mixer when using it for this purpose – a very useful feature that could also be used to help new band members learn existing songs! 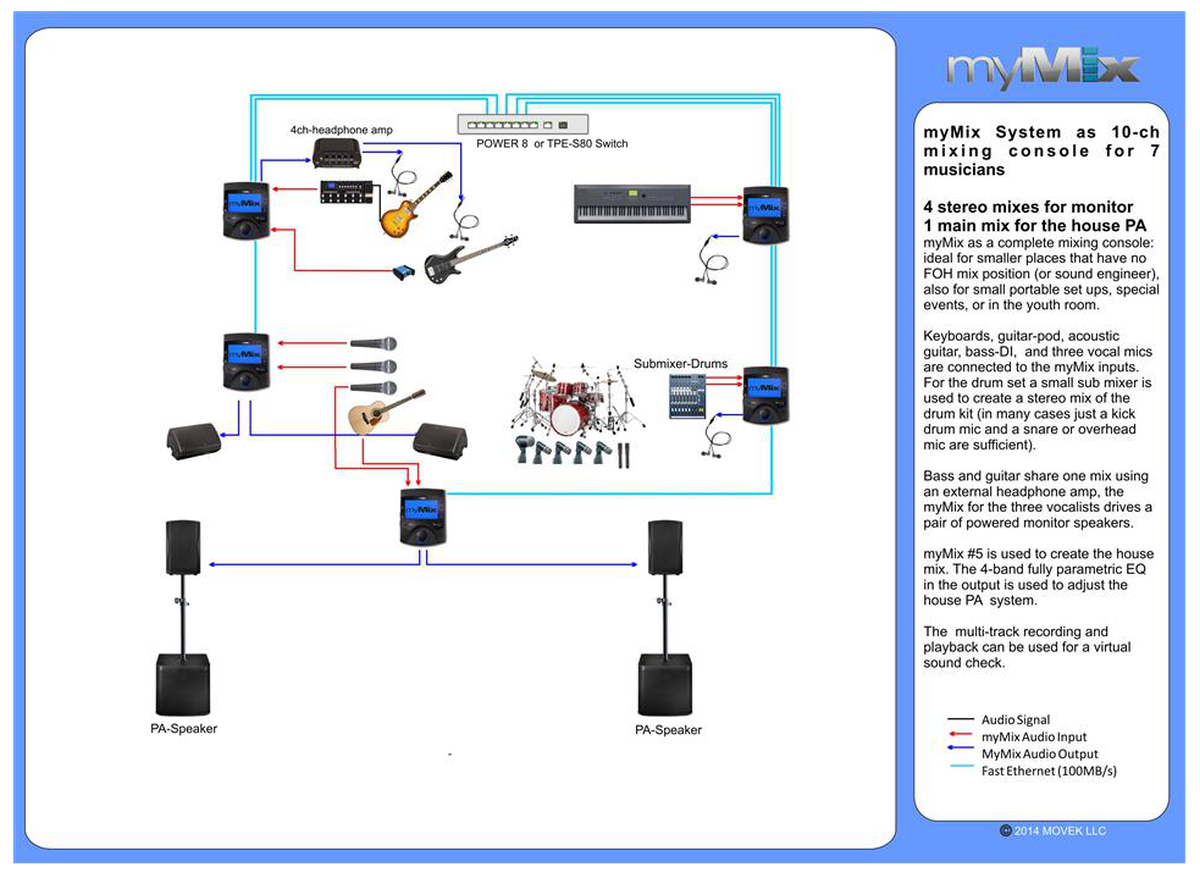 Unlike other monitoring solutions, myMix is completely scalable, meaning that additional monitor mixers can be added to your setup at any time. Each unit connects to a standard retail network switch or hub via a Cat5 ethernet cable connection, allowing multiple monitor mixers to communicate with one another (click here for a list of network switches recommended by myMix). Power to each unit is taken care of by PoE, eliminating the need for individual power supplies on every device (there is also a standard external power connection on each unit, for use in standalone mode). Once connected to the network, each monitor mixer receives audio from the other devices on separate tracks, giving each band member control over how much they hear of each individual in the band. With a maximum of 512 channels of simultaneous audio supported, you can rest assured that you’ll never be limited by how many monitor mixers you can connect.

An additional device from myMix that goes hand in hand with the personal monitor is the IEX-16L input expander. These devices allow up to 16 additional inputs (or 8 stereo pairs) to be connected to the myMix system. By connecting your monitor mixer to an IEX-16L, which is then in turn connected to your network switch via Cat5 cabling, you have the option to keep adding personal monitors to the setup, increasing the amount of inputs available for your network switch.

The IEX-16L has analogue DB25 connections, so you can easily route tracks to it from an analogue mixing desk or audio interface (via a multicore jack to DB25 cable), whilst the IEX-16L-A version includes digital connections in the form of ADAT as well. This is great in the studio, allowing you to take tracks from your DAW and add them to your personal monitor mix. It also means that in a live situation you can monitor straight from the front of house desk, without needing to split all of your signals with a DI or microphone splitter box, reducing the cabling and making for a tidier setup.

The myMix system provides a unique set of options for any musicians interested in having control over their own in-ear monitor mixes. Along with being a fantastic addition to your performing setup, the myMix Personal Monitor Mixer also has its uses for rehearsals and in the studio, and the technology allows you to keep adding mixers as you increase the number of musicians on the session. You can also create different profiles for storing session information, and the device is also a powerful multi-track recorder in its own right, making it a great practice tool and allowing you to easily record your performances.