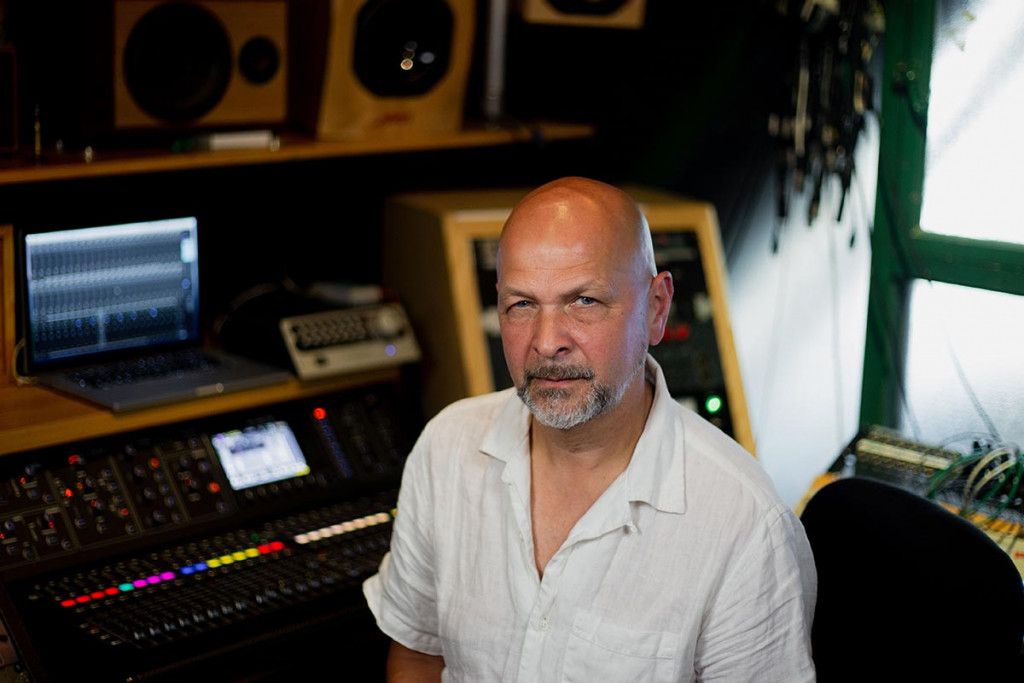 With the recent boom surrounding Dolby Atmos and Spatial Audio, we headed down to South-West London for a chat with one of the pioneers of the technique – sound artist and RME user Marco Perry.

Working from within his “Sonic Shed” – an old industrial structure hidden behind a grade II listed building in Wandsworth, South-West London – Marco Perry creates experiences. Blending unique animations and visuals with atmospheric sonic and musical collages, his compositions are mixed and played back via specially designed immersive audio installations – a way of experiencing music that Marco himself has been championing for over a decade.

Having created a number of large- and small-scale installations at festivals and art exhibitions, Marco’s passion for immersive audio attracted the attentions of Björk – a meeting which led to Marco designing an installation for the Icelandic singer’s exhibition at the Museum of Modern Art (New York City) in 2015.

We joined Marco in his Sonic Shed to find out more about his passion for designing and mixing spatial audio installations, as well as to hear more about the many pieces of RME gear he’s used over the years, which includes a large number or RME’s multi-channel AD/DA Converters.

You can also watch our video interview with Marco Perry on YouTube below.

Mixing for immersive and spatial audio

Having started out as a tape-op in various studios, Marco’s experience with tape and low track counts helped shaped his early workflow.

“That leads you to a mode of thinking where you’ve only got a certain number of tracks to play with,” recalls Marco when thinking back to the days of 24-track tape recorders. “These were heady days – everyone was so excited about the developing recording world. This was without even discovering the beauty of working digitally.”

“Digitally we can do so much that we could never do. With computer power, with loudspeaker management systems. We can control and manipulate sound more than ever, which is something that always fascinated me.”

Marco’s interest and involvement in immersive audio runs deeper than a simple fascination with new technology. Seeing a gap in the way music and sound was being presented to audiences, Marco began to consider how audio could be used to create ‘enhanced experiences’ for audience members.

This interest was heightened after Marco himself experienced a life-changing event – one that continues to influence his pioneering approach to composing, recording and mixing to this day.

“After I was in a coma for six weeks, I wanted to do something more useful and beneficial to humanity perhaps. I believe in sound’s ability to change people’s lives, and be powerful and transformative.”

“At the end of it, what is your life about? It’s not about how much money you have or the cars on your drive. It’s about who you were with and what you shared – the experiences you shared. So, I wanted to create experiences.”

The concept of these experiences all follow a similar idea – sharing a space “without paraphernalia”, and experiencing something along with the rest of the audience (as opposed to the subjective experience of, say, a silent disco).

On working with Björk

A defining point in Marco’s journey into immersive audio was his aforementioned work with experimental singer-songwriter Björk, for a retrospective exhibition at the Museum of Modern Art in New York City.

“When she came in, from an aesthetic point of view, she just got it,” Marco recalls. “So I got the opportunity to design a system for her exhibition at MoMA. It was a massive learning curve, but it was well received. It was nice to have my name on the wall, and it made people realise that I was very serious about what I was doing.”

With the relatively recent popularity of Dolby Atmos and other spatial audio formats – a rise to prominence that Marco could see even in his early days – Marco’s spatial audio experiences have been shown at iconic fextivals like Glastonbury, as well as popular attractions such as the Eden Project in Cornwall.

“I used to have to evangelise about 3D audio and its benefits, but nowadays I can just focus and dedicate my career to creating these experiences.” 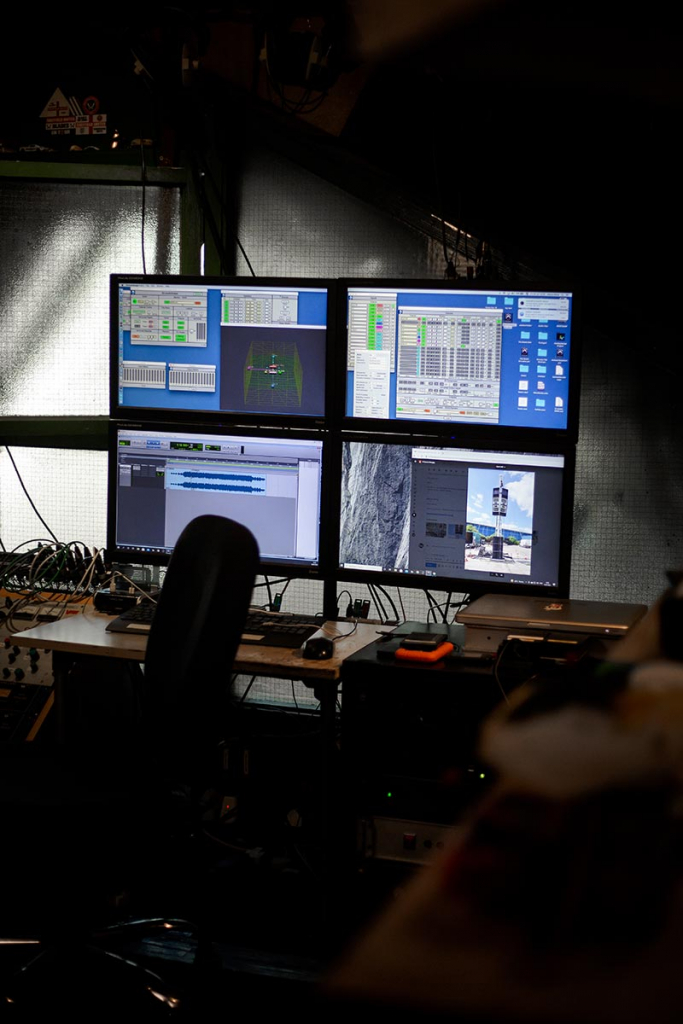 Inside “The Sonic Shed”

From inside the light industrial building he refers to as his Sonic Shed, Marco composes, constructs, and mixes his immersive audio works in a space he designed, specified and built himself.

The majority of Marco’s workspace is dedicated to Ambisonics – a full-sphere surround format which includes sources above and below the listener.

“The sweet spot is right there,” Marco states whilst pointing at his Nuendo rig on a pedestal in the middle of the room. “It’s a total of 43 loudspeakers, consisting of 12 speakers in a ring at ear height; 12 loudspeakers lower down pointing up; 12 loudspeakers pointing down; and 5 on the ceiling plus two subs.”

Whilst designed to replicate an Ambisonic sound field, Marco mentions that’s he always had flexibility in mind.

“It’s flexible enough that I can change formats. If you want something in a traiditonal surround format, I can do that. I can use the whole system for ambisonics, but with additional loudspeakers I can work with different decodes too.”

From the ambisonic sound field, Marco can also create a host of other spatial audio information. Binaural audio is also possible, whilst the space has also been approved for Dolby’s increasingly popular Atmos format.

“The studio setup for me now is what I need, it’s got all the tools I need and nothing else. I’ve kept the essential bits of gear, the boxes that define what I do,” continues Marco. “Anything else is like a soldier in the barracks – it’s not really doing anything.”

“The whole system is controlled by MADI, with a MADI stream that will access all of these speakers individually, controlled by my RME MADIface USB.” 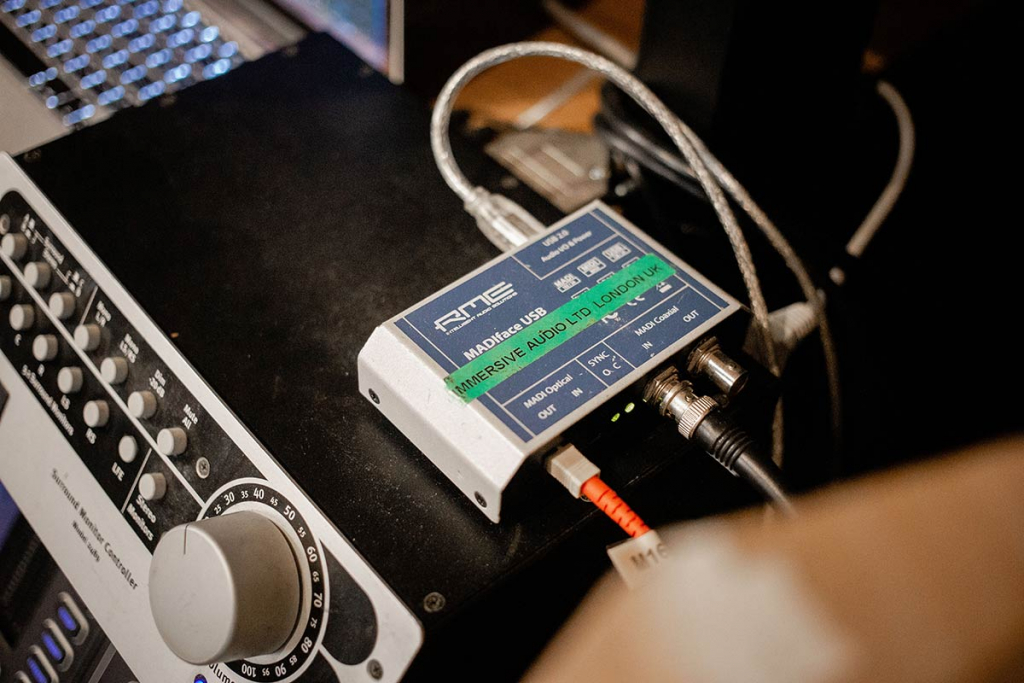 Hidden in every corner of Marco’s workspace, RME gear can be found. Having started with an RME ADI-8 DS in order to break out of his G5 Mac, Marco’s connection to RME goes back nearly 20 years.

“I liked the fact that it was 24 bit and 48k. And after I used the ADI-8 I never went back to anything less than 24/48,” Marco recalls. “It just sat there and worked, which is something that RME has always done.”

“My ADI-8 was really good for its time, when I was using that, it was the way to go forwards. ADAT was the format to use then, but now I’m all about MADI.”

Marco’s collection of RME gear continued to grow, adding five HDSPe MADI FX cards to various Mac and PC workstations, used both in the studio and for his installations.

A common theme among RME users, Marco notes the reliability of RME hardware as something he particularly loves about the brand, as well as the company’s commitment to providing users with long-lasting products.

“I find that such an endearing quality, it’s lacking in a lot of manufacturers these days,” Marco says. “Testimony to that is that I still have units from twenty years ago that still work and there’s plenty of people out there who are still using their products every day from many years ago.”

“RME as a firm does cater for any audio professional. It’s reliable and you can trust it, which is exactly what I’ve done on exhibitions all around the world. They sit there every day and work faultlessly without a single failure. When I’m working with galleries, I’ll usually send the gallery some instructions. And my favourite instruction manual usually says ‘at the beginning of the day turn it on, and at the end of the day turn it off’. RME products make that possible, I really trust them.” 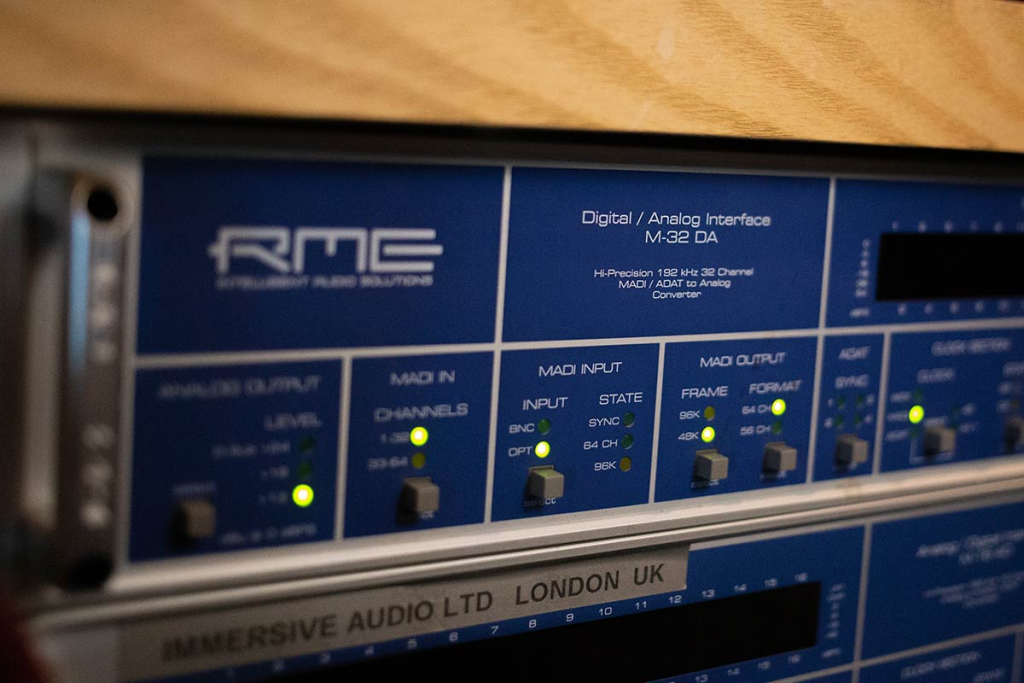 One of Marco’s favourite units – and one that forms an integral role in his installations – is the RME M-32 DA Converter. Featuring coaxial and optical MADI as well as 32 balanced line level outputs, the M-32 DA provided Marco with the perfect solution for running a MADI stream out to the many speakers used in his installations.

“I think the M-32 DA is one of the finest designs, I really do,” Marco states, “I’ve still got six DA units sitting here in the studio, and I had many more when working with Bjork on her various exhibitions around the world.”

Visual reference is something that Marco says is important, with the M-32 offering digital input levels for all 32 channels. The status LEDs for every section of the interface is also an important feature, giving Marco the ability to glance over settings without needing to dive deeply into settings menus.

“My eyesight is not what it used to be,” laughs Marco, “so being able to see everything on the front of the unit makes my life easier.”

“I’m still in love with my M-32s, but if I was to upgrade, I’d go for the M-32 Pro. I’ve had a chance to test it out and there’s some things that I really appreciate about it.”

With the same 32-channel count as their predecessors, the RME M-32 Pros add state-of-the-art AD/DA conversion and AVB networking connectivity to their already impressive I/O, all within a slimmer 1U housing.

“I love that it’s all in a 1U box, so if it’s going out to installations it takes up half the space and weighs a lot less than the 2U M-32s.”

Alongside the coaxial and optical MADI I/O, all 32 channels of the M-32 Pro AD or DA converters can be transmitted at 192kHz sample rate through a single ethernet cable. What’s more, this can now be controlled by RME’s new browser-based routing interface when connected to a network.

“RME as a firm does cater for any audio professional. It’s reliable and you can trust it, which is exactly what I’ve done on exhibitions all around the world.” 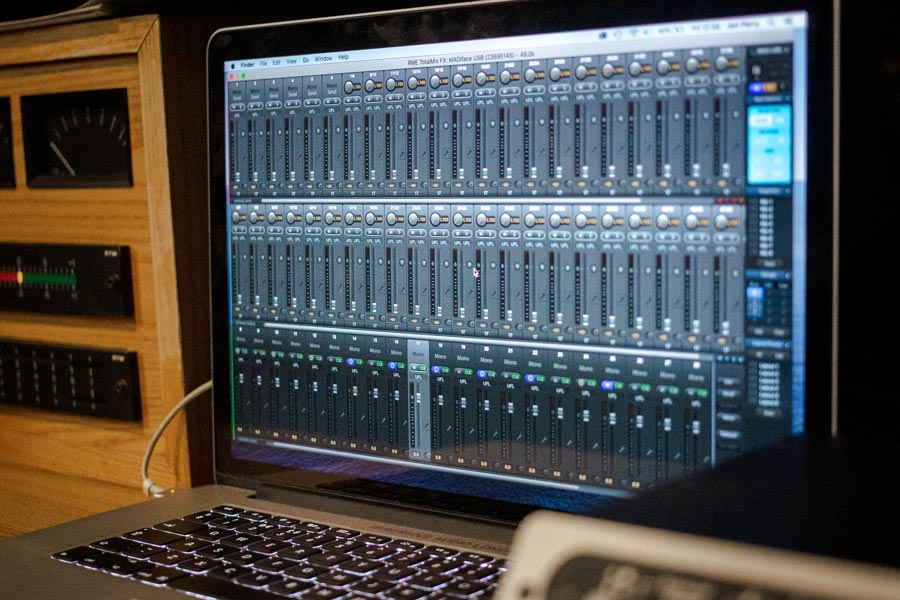 By pairing the powerful conversion of RME’s standalone converters with an RME MADIface USB interface, Marco also makes use of RME’s TotalMix mixer, RME’s powerful mixing and routing software which allows for the routing of any input to any output.

“It gives you control without having to have another bit of hardware in the system. It’s got enough control that I can take pairs or individual channels from the mixing desk or from Pro Tools”

“It’s just a total breeze, I mainly use it in a really basic way, for mixing and balancing of stems. But it’s useful for more much more than that, once you get the hang of it, it’s so useful for instant control.”

New to TotalMix? You can watch RME’s tutorials on how to get started here.

Massive thanks to Marco Perry (and Spy) for having us down to the Sonic Shed! Marco will be embarking on a large-scale installation in the grounds of Cardiff Castle through October 2021. Learn more about the event through the page here.

To contact Marco about his immersive and spatial audio installations, head over to the immersive audio website.