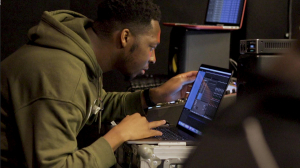 We chat to Production Manager, FOH and Monitor Engineer Femi Bello about working with some of the biggest artists in the UK Rap and Grime scene, as well as how the RME MADIface XT fits into his live rig.

Having already worked with some of the biggest names in the UK Rap and Grime scene, Femi Bello (@femithesoundman over on Instagram) has been behind the desk as an FOH and monitor engineer for the likes of Little Simz, Central Cee and Headie One. At this year’s Reading and Leeds festivals, Femi was the engineer behind UK artist Aitch’s Main Stage debut.

We met up with Femi at John Henry’s in North London on the last day of production rehearsals for rapper Pa Salieu’s headline UK tour. We sat down to chat about getting started in the live sound industry, working with some of the biggest rap artists in the UK and how the RME MADIface XT has become an invaluable addition to his setup. 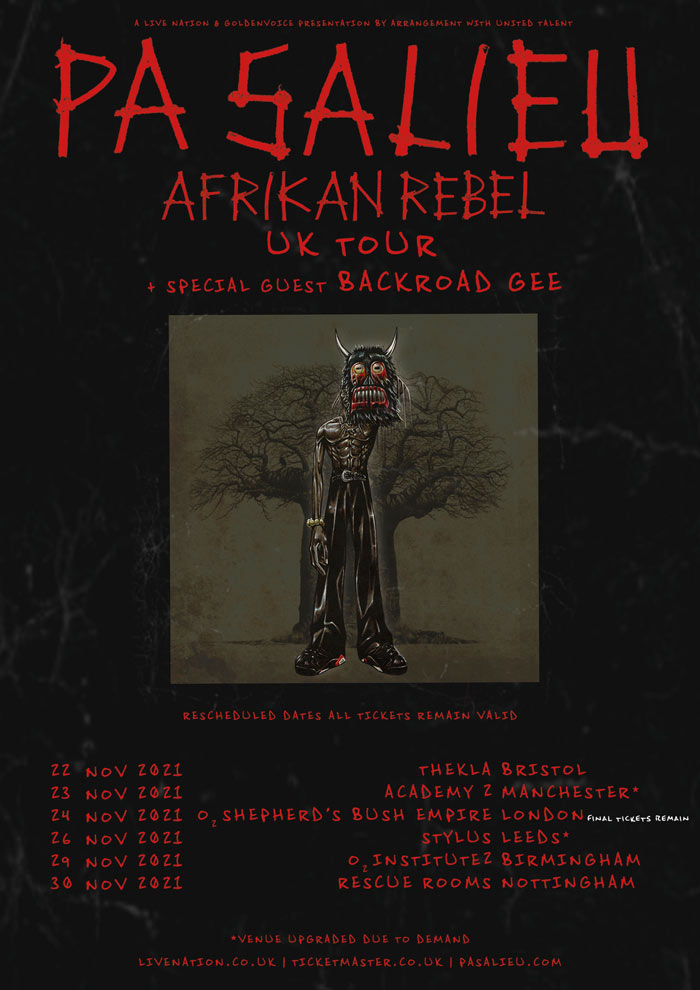 The artist was Gambian-British 23-year-old rapper Pa Salieu. Listed amongst GQ Magazine’s “new musicians who will make 2021 better”, Pa’s “genre-less” blend of sounds merges Afrobeats and UK rap and has gained the attention of BBC 1Xtra, DJ Annie Mac and MTV. Released in 2020, his breakout track “Frontline” was featured on The Tonight Show with Jimmy Fallon in January 2021, further catapulting Pa into the limelight.

With the COVID-19 pandemic creating uncertainty for touring musicians and performers through 2020 and the early stages of 2021, Femi has been involved with Pa Salieu’s “Afrikan Rebel Tour” for longer than many of the other jobs he’s taken on.

“It’s been a year and about four months we’ve been working together. It was postponed, it was supposed to happen earlier in 2021 but because of the pandemic it’s only just happening now.”

The week-long tour took in dates across the UK, including one night at the O2 Shepherd’s Bush Empire. Having worked as a front of house engineer, monitoring engineer and production manager for various artists, Femi is well versed in taking on multiple roles.

“On this tour I’m looking after front of house and monitoring as well as the recording so I’m basically doing a three-in-one job” he jokes.

“We’re in production rehearsals so I won’t actually be dead on the nights. I’ve already sorted out the band’s monitoring so there isn’t anything crazy that will need changing in the mixes. Just a few decibels of this and that.” 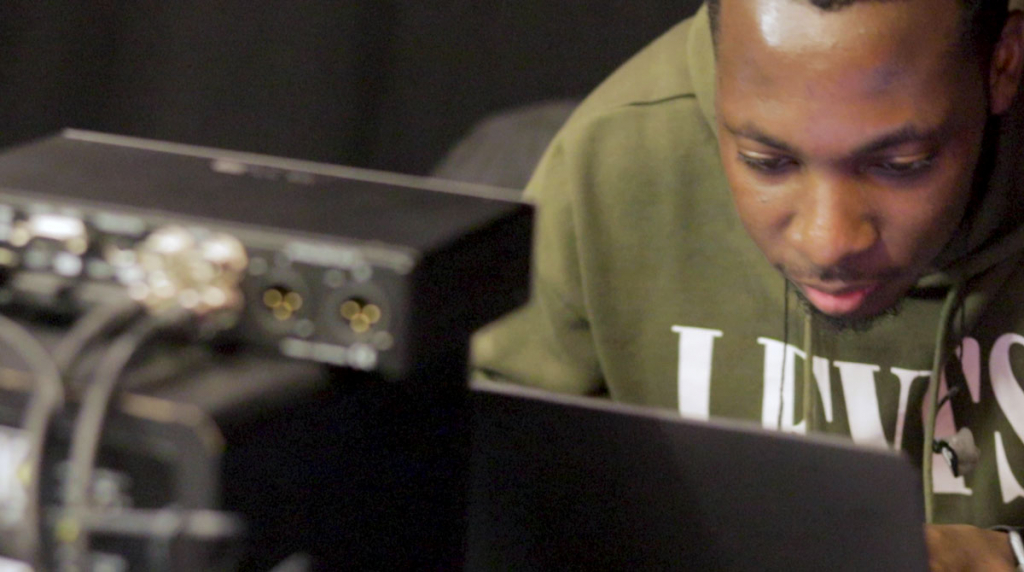 Getting Started in Music

Femi’s experiences with music and live sound started through his church. Starting off as a drummer, Femi recalls how performing at church led to his interest in live sound.

“I started playing drums. In church you sort of just learn everything; everyone’s doing everything”, Femi starts. “You learn to play drums, keyboard, the bass. You learn about sound and that’s exactly where I started mixing.”

After finding his passion whilst worshipping at church, Femi decided to enrol in a degree course at the University of Westminster, London.

“I did a BMus course in Commercial Music and went on to do a Masters in Audio Production. I started by mixing people’s tracks at university – things like drum covers and piano covers. Since then – even before then – it’s just been hectic.”

During his time on the Masters at Westminster, Femi was also out on the road working with various artists, putting the things he had learned in the classroom into practice at gigs around the world, including working with the House Gospel Choir at the Singapore Formula 1 Grand Prix.

“It’s crazy, the industry is opening up again and I’m just trying to be here, there and everywhere.”

“I remember being on my Masters and I would disappear for a couple of weeks because I was on tour. I would come back into submit the work and everyone would be surprised I’m still here,” Femi jokes, “it’s like ‘no, I’ve just been on the road’.”

Femi’s live sound career would begin when he approached friend and sound engineer Nikoma Bell . Nikoma, who’s resume includes Duffy and Tinie Tempah, offered Femi an opportunity to work as a technician during the “University Gospel Choir of the Year” that he was working on.

“I could ask him any questions. He took my little bit of experience and gave me the opportunity to learn more and develop myself more.”

Since then, Femi’s CV has continued to grow, with stints working with some of the biggest names in the UK. Alongside his work with Pa Salieu, Aitch and Little Simz, Femi has also been on sound or monitoring duties for the likes of Headie One, Krept & Konan and UK Hip Hop collective D-Block Europe, who Femi will also work with after the Pa Salieu tour.

“We’re doing all the big arenas. Manchester Arena, O2 Arena, Cardiff, Nottingham, Birmingham. All of them.”

The COVID-19 pandemic cancelled or postponed many tours across the UK and the world. Leaving the Pa Salieu tour to join the D-Block Europe arena show run, Femi has been trying to pack in as much work as he can.

“It’s crazy, the industry is opening up again and I’m just trying to be here, there and everywhere.”

Used across a wide range of industries, RME’s reputation for creating reliable, powerful devices has meant that they are constantly called upon by professionals. Designing everything from interfaces to AD/DA converters and cutting-edge audio networking systems, RME’s flexible devices can be found in the live sound rigs of some of the biggest acts across the globe.

“I remember needing to record from a Digico SD10 and it had MADI on the back of it. Rapha has the MADIface XT, the Babyface, and also the MADIface USB that just does 64 channels. I borrowed that and instantly thought ‘wow, this is crazy. I need one.’” 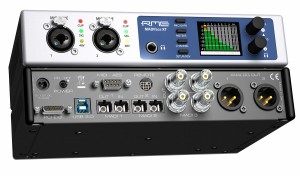 After Femi discovered RME through Rapha Williams, he added the RME MADIface XT to his rig just in time for Aitch’s main stage Reading and Leeds Festival performance, putting it to the test on a show seen by thousands of people live and by many more through the BBC’s coverage of the festival.

“I’m using Logic and sometimes Pro Tools alongside RME’s MADIface XT. It basically interfaces my Digico mixing console with my laptop and allows me to record. The channel count on this tour is around 47 plus some other things so I’m currently actually recording about 64 channels. It’s a lot of channels to be doing monitors and front of house on!”

The perfect interface for any MADI-based recording system, the RME MADIface XT can handle up to 196 inputs and 198 outputs whilst still being an incredibly portable device. Thanks to its triple-MADI I/O, the MADIface XT continues RME’s tradition of creating I/O packed interfaces that take up very little space.

“I borrowed that and instantly thought ‘wow, this is crazy. I need one.’”

“Honestly, the XT is great. I realised I needed it and it just make sense for my rig. It’s got three streams of MADI so I can convert optical MADI to BNC if I need to. That’s been useful from time to time with some other gear I use. I can also multi-track on top of that. In my case, I was mainly using the BNC and the channels start from 129. But there’s a function on the software that allows you to mirror MADI 1 and 2 to MADI 3 so that your channels start at 1 if you’re using BNC.”

With a staggering 394 channels available thanks to its three MADI connections, the MADIFace XT is the perfect device for high-channel count applications, especially for those demanded in the live sound industry.

Alongside the three available MADI streams, the MADIface XT features two XLR/TRS combo inputs on the front panel for quick recording of microphones or instruments. The rear panel XLR outputs offer a way of being able connect studio monitors, whilst the headphone output on the front panel is also available for quick monitoring of any input or output signal. 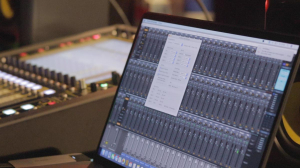 “Funnily enough I was in a studio that had an RME interface. It was the first time I’d used TotalMix and it was really straightforward.”

Offering control of all input and output channels of the MADIface XT, RME’s TotalMix is an incredibly powerful digital mixer. Offered as part of the driver with every RME interface, TotalMix FX brings nearly unlimited routing and mixing possibilities and the ability to create as many independent submixes as output channels available.

The MADIface XT comes packaged with TotalMix FX, offering a selection of effects that can be added to input and output channels. EQ and dynamic controls are available and can be added to the recording chain, as well as reverb and delay.

With rapid access and level information for every single channel, TotalMix makes it incredibly easy to hear any channel on an RME interface. Other It is also possible to hide tracks that aren’t in use, as well as renaming individual channels for easy recognition, making high-channel count operation, like with the MADIface XT, a breeze.

Having found his passion for sound through his church and later gaining industry experience with his good friend Nikoma Bell, Femi’s closing words in our interview were aimed at those aspiring to be a part of the music industry.

“It’s very easy now to download a bit of software on the internet”, Femi starts. “Whether that’s Logic, Fruity Loops or Ableton, just experiment. There’s no real formula to this, it’s just all about experimenting. It might be sound engineering, it might be production or sound design, it’s just about doing what makes sense to you.”

Our thanks to Femi for chatting to us. You can keep up with Femi’s work through his Instagram