Many modern studio setups blend analogue hardware with “in-the-box” workflows. With that in mind, RME Audio’s latest video discusses the differences between analogue and digital levels, as well as the importance of level matching.

Hybrid music studios have become a popular choice when it comes to recording setups. Both smaller home studios and larger commercial recording facilities now feature a wide mix of analogue outboard and instruments which are then being recorded digitally via a DAW. Hybrid setups present the best of both worlds for musicians and engineers. They offer the sound characteristics of analogue gear with the reliability of digital.

But with the merging of analogue and digital equipment comes several audio related challenges. These can include issues with signal clipping thanks to high levels from analogue equipment, or analogue gear being overdriven by the output of an interface. Understanding some basic audio level principles and the concept of level matching will resolve these issues.

In RME’s latest YouTube video, product specialist Adrian discusses analogue and digital audio levels, as well as breaking down some of the terms and measurements used to help improve your hybrid recording setup. 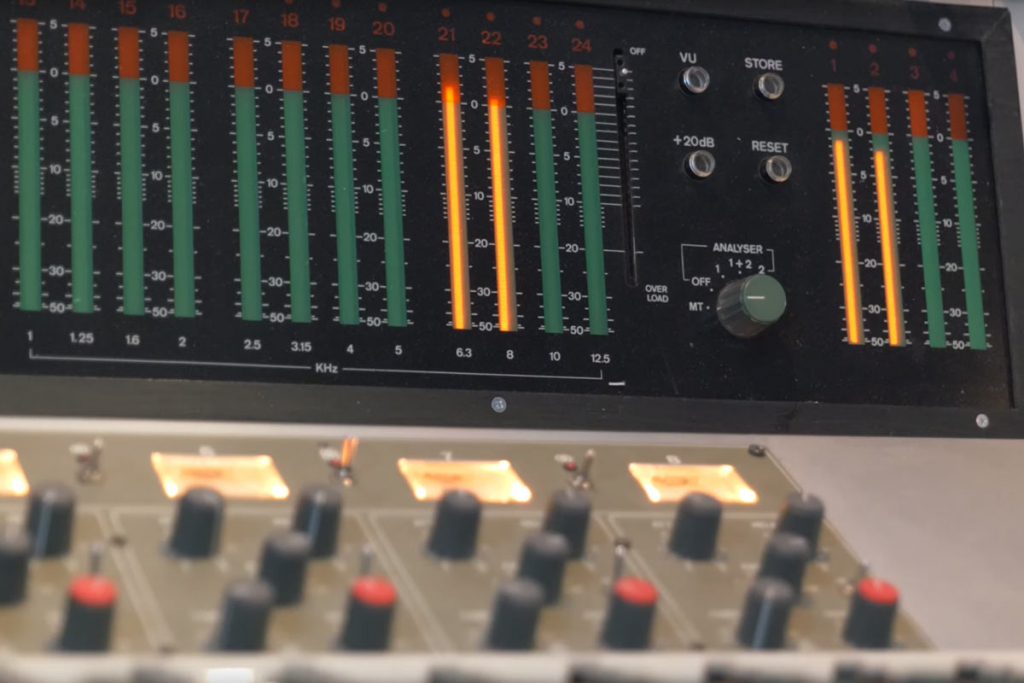 Whilst dBu and dbV are used to measure analogue levels, variances in the levels across equipment could cause issues with your recording. For this reason, two widely recognised standards used to measure audio signals in the music world. Professional studio equipment uses +4dBu as its standard operating level, whilst home electronics, like TVs or Hi-Fi equipment, use -10dBV as standard, which is considered consumer level.

Unfortunately, dBu and dBV aren’t interchangeable. In fact, in terms of loudness, +4dBu studio level is around 12dB higher than the consumer level of -10dBV. Given that these are RMS levels and therefore an average, the actual level difference could be even higher. This means that a careless confusion between standards could have disastrous effects on the quality of your recording.

Whilst analogue signal levels are described in dBu, the binary nature of digital audio makes it impossible to measure digital signal levels in the same way. For this reason, digital levels are defined as a measurement called dBFS, or decibels relative to full scale. This measurement, unlike dBu, features a defined maximum peak level of 0dBFS. In practice, this means that any level above 0dBFS will cause an overload and result in digital clipping. This is where the idea of leaving “headroom” in a recording comes from, as unlike overloading an analogue signal, there is no pleasant effect that comes from overloading a digital signal.

As you may have already guessed, like the standards used for measuring analogue levels, dBu and dBFS are not interchangeable and are used to define levels in two different contexts. The issue with this is that there is no easy way to match the output of your analogue gear to a relative digital dBFS level. 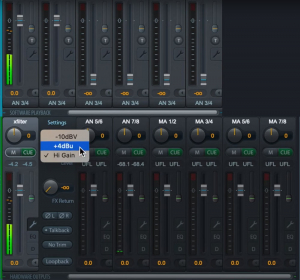 RME’s range of audio interfaces use reference levels to help resolve issues with these different standards. These reference levels are available at both the input and output stage of the AD/DA (Analogue-to-Digital/Digital-to-Analogue) converter and offer a more exact indication of the dBU level at 0 dBFS. What’s more, these switchable reference levels offer available headroom in relation to the level of your analogue studio gear. The reference levels used by RME on their interfaces have also been applied to other products across the RME range, ensuring compatibility through the signal path.

The reference levels available on RME interfaces for the analogue inputs are:

The reference levels available on RME interfaces for the analogue outputs are:

All RME audio interfaces feature TotalMix FX, an extremely powerful built-in DSP mixer and software. TotalMix FX offers near-limitless mixing possibilities thanks to the ability to route any hardware or software input to any physical output. As TotalMix is DSP-based, all the processing is handled within the interface, taking the strain away from your computer.

As mentioned above, TotalMix makes managing a hybrid studio workflow simple, thanks to its switchable reference levels. With a simple click of a button, each analogue input and output can be adjusted to match the incoming or outgoing standard of your analogue hardware, whilst giving ample headroom.

What’s more, mixer states and controls, such as 48V phantom power, gain levels and routings can all be saved as “snapshots”, making it easy to recall previous routings at the touch of a button. TotalMix even makes it possible to hide unused channels, so that only the levels you require are visible. 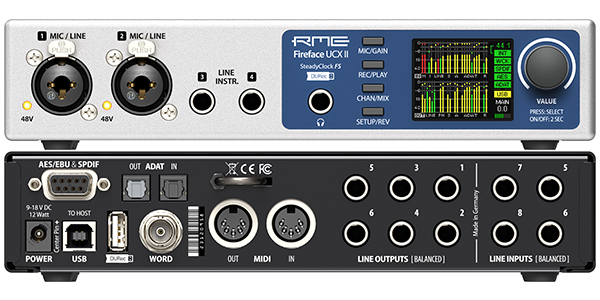 RME’s reputation has been built upon designing devices that are as flexible as they are powerful, and their range of audio interfaces are no exception. The RME interface range covers a wide range of scenarios with different applications in mind. The 24-channel Babyface Pro FS and 40-channel Fireface UCX II bring professional audio to a portable form factor, whilst the 394-channel MADIface XT easily manages high channel count applications.

Connectivity also forms a large part of the RME design ethos, with many of their interfaces featuring a large amount of digital and analogue I/O options into small packages. The entirely bus-powered Babyface Pro FS is a truly portable interface, offering phantom power to both of its mic preamps without the need for external power. RME’s latest interface release, the Fireface UCX II can run entirely independently of a computer, including the ability to record directly to a USB hard drive.

Alongside their power and flexibility, RME interfaces have long been known for their reliability. Designed in-house by their team of engineers, RME’s drivers are revered for being rock solid, whilst the company’s commitment to updating their drivers has meant that products from as back as 2001 still work perfectly on the latest operating systems. 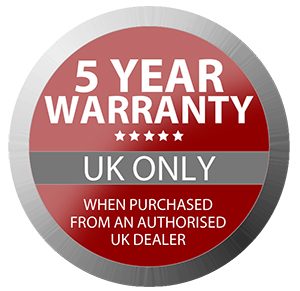