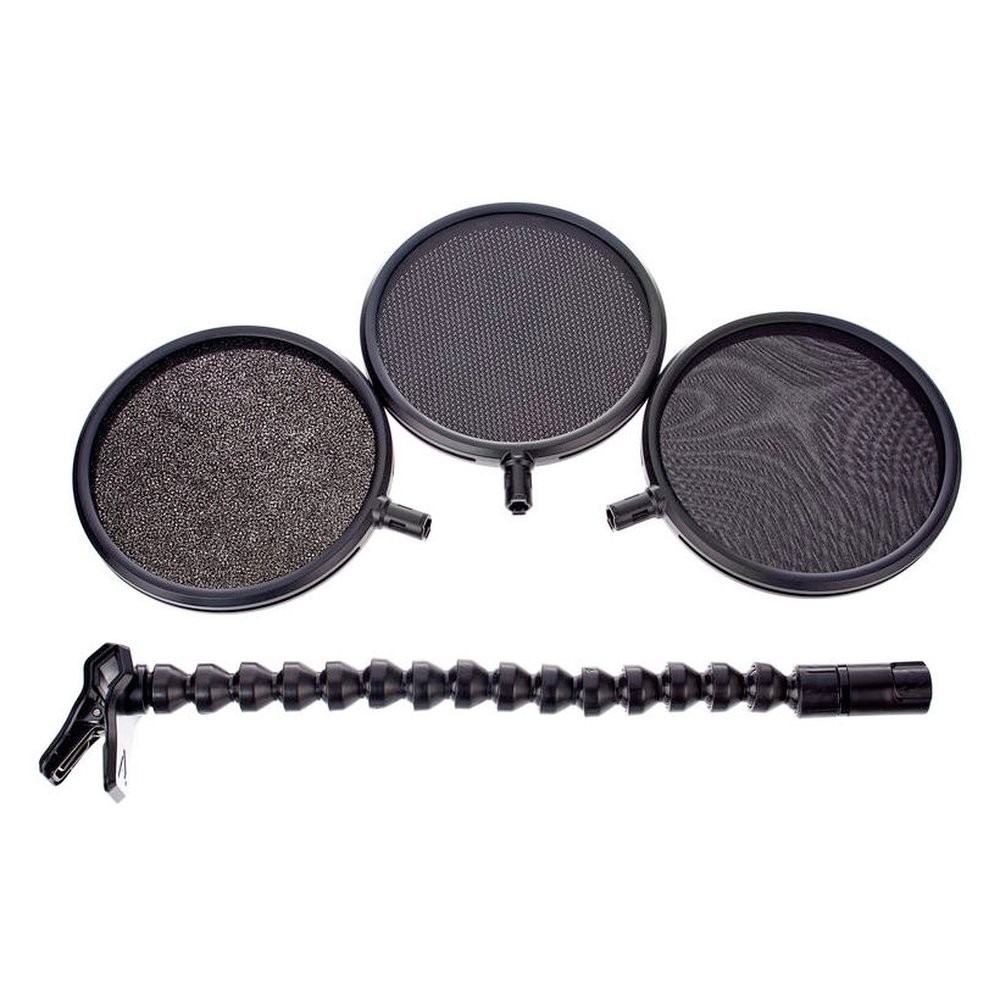 In this article originally posted on the Pop Audio blog, pop filter designers Pop Audio explain the differences between each of the three filter types they developed during the creation of their innovative pop shield, along with the research and thought-process behind each design.

Since its release last year, the Pop Audio Pop Filter has become a popular choice for recording in both professional and home studios. Musicians, producers and engineers, as well as youtubers, vloggers and voice-over artists have all been impressed by Pop Audio's unique redesign. Removing many of the frustrations of a standard pop shield, such as weak clamps and wilting arms that won't stay in place, and featuring swappable filters that are easy to clean or replace if damaged, Pop Audio have successfully created a pop shield that's sonically transparent, simple to use, and built to last.

During the design stage, Pop Audio experimented with a range of materials and thicknesses, resulting in the creation of three different types of filter. Each one is designed with a different purpose in mind, and features slightly different acoustic properties. As a result, the guys at Pop Audio have written an article to explain the thinking behind each filter, as well as providing frequency response information, so you can choose the right filter for the job.

When we started Pop Audio we wanted to not only make the easiest and most convenient Pop Filter around, but to also to make it the best sounding Pop Filter available. It not only had to effectively stop all plosives, air blasts and pops, but to leave the sound passing through as unfiltered as possible. After all, a Pop Filter is at the very start of your signal chain and you don’t want it to affect the quality of your sound before it even reaches the microphone.

One of the questions we get asked the most is:

“What’s the difference between your three filter materials?”

This article will explain not only the differences between the filters but also show you why we designed them in the way we did. 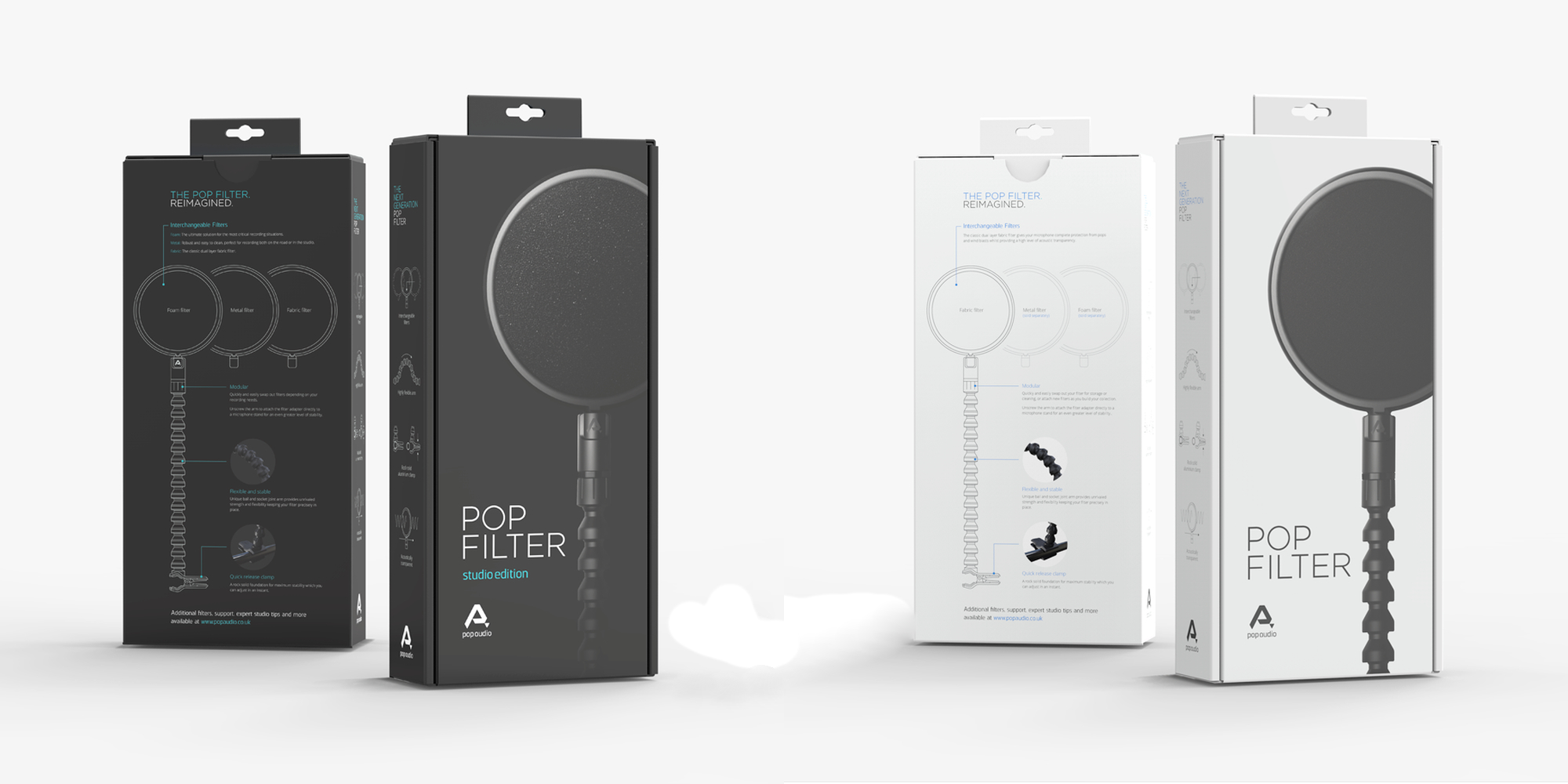 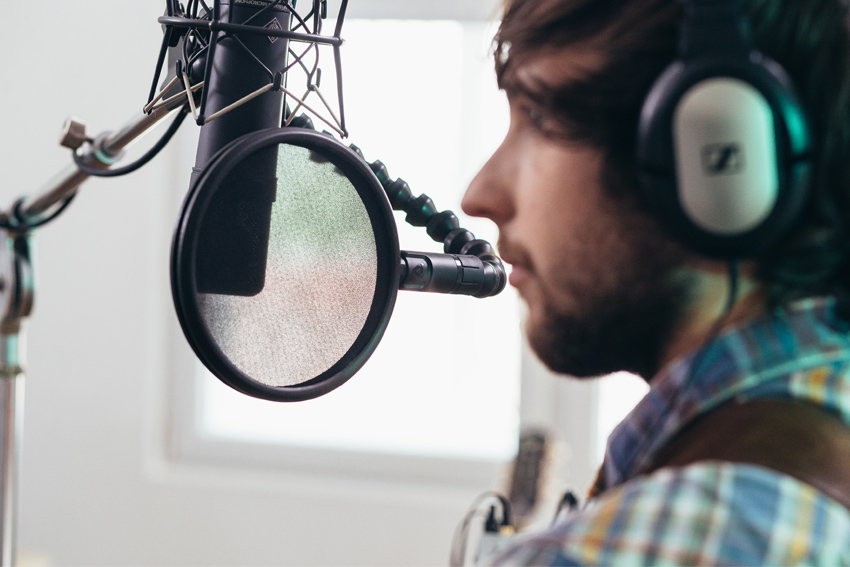 Fabric is the material traditionally used in the manufacture of Pop Filters and is normally made by stretching the material around the filter surround under tension. This is extremely basic and, because of this, many people simply make their own ones at home by getting an old pair of tights, cutting some of the material away and stretching it around a coat hanger fashioned into a ring. However, these will often not solve the problem of stopping plosives or providing an acoustically transparent filter because tights are simply too thin to effectively stop an air blast and the material used will cause audible filtering of the sound travelling through it.

Pop Audio took this information and wanted to find the best way to construct a better fabric filter. We started by using a technique seen in other high end Pop Filters which involves using two layers of fabric separated by an air gap within the filter construction. By having these two layers, the air blast is diffused by the air gap between them, lowering the SPL after the filter, which stops the air from causing the popping sound at the microphone capsule.

After calculating the correct air gap to stop the pops, we started to look for the correct material to use. This involved large numbers of fabric samples which we put into our prototype 3D printed filter housing and tested until we found the right fabric and weave that gave us the highest level of acoustic transparency.

At the end of this R&D process we were left with the fabric filter that we manufacture today which gives extremely high levels of filtering for air blasts and plosives whilst being as acoustically transparent as the material allows. Below you can see a frequency response graph, which shows our Fabric filter compared to a traditional fabric filter that is currently on the market.

Metal filters have become incredibly popular in recent years because they offer higher levels of transparency whilst also being thinner and more hard wearing. Traditional metal filters work by having a single sheet of metal with hundreds of tear drop shaped holes stamped out of it. This shape diverts the air out of the way of the microphone to try and stop pops. This means that only a single layer is needed allowing it to be produced more cheaply as well as making the filter lighter, and therefore easier, for the gooseneck to support. 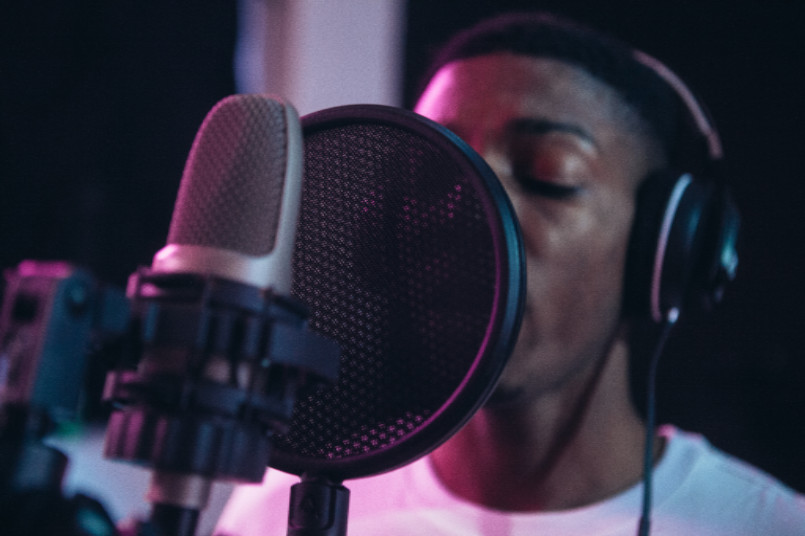 However, this approach is not without it’s drawbacks. By diverting the air in a different direction, the filter will affect the tonality of the sound passing it through it, often introducing a high frequency whistling effect. A thin filter maybe lighter and thus easier to use, but by using such thin, unsupported metal it is easy to dent and damage whilst travelling.

With this in mind, we wanted to design our metal filter to make it as acoustically transparent as possible, but also strong and hard wearing. Specifically engineered for musicians, engineers and producers who travel and record in different places frequently.

To address these issues we quickly wrote off the single layer, tear drop perforation design. In our opinion this introduced more problems than it solved and so we looked back at our fabric filter. This filter stops pops and plosives well by using a dual layer design. We decided to apply these principles to the metal filter. The filter works by using the air gap between each layer to diffuse the wind blast, slowing the air down rather than directing it out of the way.

To make the metal plates as acoustically transparent as possible we drilled thousands of perfectly circular holes in each metal sheet until we found the best balance between rigidity and acoustic transparency.

By manufacturing our filter in this way, we also made a much more rugged filter suited to life on the road. With the two metal layers inserted into a strong surround our metal filter is able to be thrown into bags and flight cases without fear of damage. We even dented prototypes during the research and development phase and found it still continued to stop pops and plosives. The metal filter is a filter you can rely on.

Foam is a material that has only been associated with Pop Filters in the last few years, however as a material, it’s acoustically transparent properties have been known about for a long time. 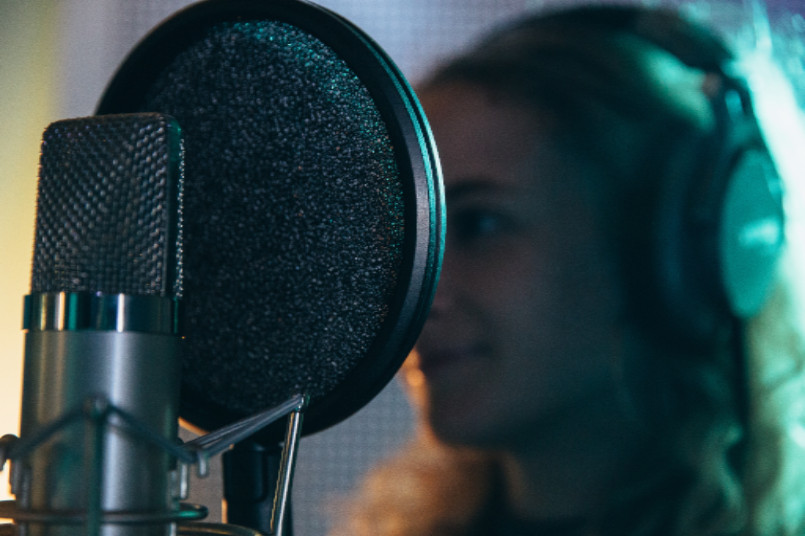 It is often associated with windscreens that are applied to the end of microphones in live situations. In this application, thick dense foam is used to stop wind noises getting to the microphone at the expense of some acoustic transparency.

However, foam has been know to be acoustically transparent for a long time, with guitar amplifier and PA system manufacturers having used it for decades to protect their speaker cones from the elements, whilst allowing the sound to transmit through the material freely. One such manufacturer is Marshall, who now use cloth grills for increased durability.

Foam filters work in a different way to our other filters. With the open cell property of the foam, the cells inside act as hundreds of air gaps to diffuse and slow down the air from a plosive. By having less material in the way of the sound travelling through the filter, you end up with a much higher level of transparency. We tried many different specifications of foam to find the perfect mix of thickness and cell density, finally finding the foam we use today. It has enough cells and thickness to stop every possible plosive, whilst being open enough to give extremely high levels of acoustic transparency.

The only downside of using foam is that it is a delicate material and because of this we recommend that it is used only in a studio environment. 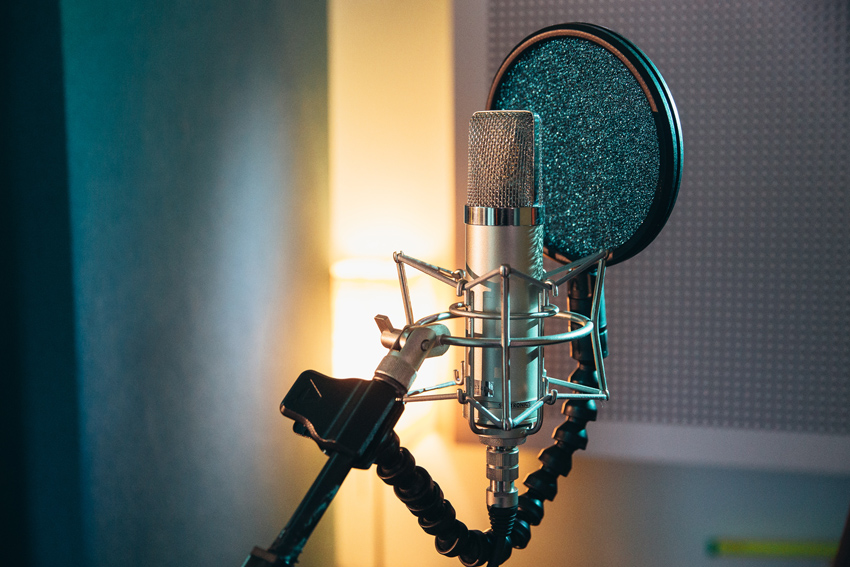 During the R&D process, we found that the filter surround also affects the acoustic transparency of Pop Filters. Many filters on the market are relatively small in diameter and, even when the filter material is removed, they cause slight changes in the sound through comb filtering caused by sound travelling around and through the surround.

By designing our filter to be larger than most others on the market it enables our surround to be further from the sound travelling through the filter. This means that less will travel around the edge of the surround causing comb filtering. Because of this we were able to massively reduce the effect of the surround on the sound.

We also gain other benefits from having larger filters as it means that musicians feel like they have more space to move around in front of the filter compared to smaller filters, as well as the filter being more useful on wind and brass instruments that have large bells.

With our three filters, Pop Audio is able to offer recording engineers, musicians, producers, voice over artists and vloggers, the most transparent and effective Pop Filters available. Each of our Pop Filters have spent years in R&D and are designed to give you the best filtering in every situation you may record in.

This article originally appeared on the Pop Audio blog.

Find out more about the Pop Audio Classic Edition

Find out more about the Pop Audio Studio Edition 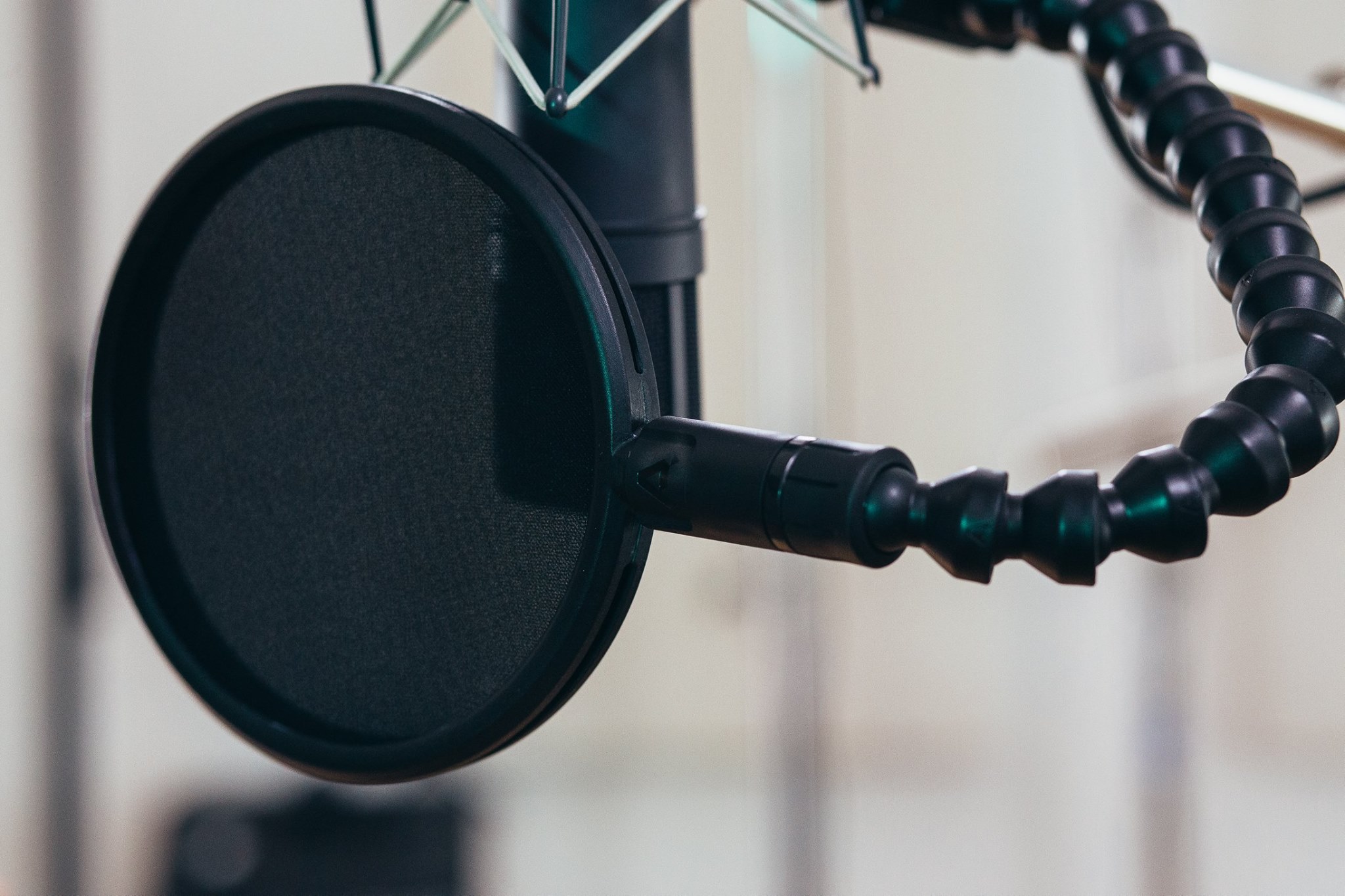 The Pop Audio Pop Filter comes complete with a strong, quick release clamp, a heavy-duty adjustable arm, and a range of interchangeable and replaceable filters. With a unique ball and joint system, the arm of the Pop Audio Pop Filter is both strong and super flexible, allowing you to position the filter exactly how you need, safe in the knowledge that once position it will stay there.

Critical acclaim has come from the likes of MusicTech, Audio Media International and Sound On Sound, with reviewers complimenting the intelligent and well thought out design. It was also chosen by AMI for their Gear of the Year 2016, winning the “Best Studio Solution" Award, plus received MusicTech's "Excellence" accolade, who described it as “quite simply the best pop filter we’ve ever seen”.