True to its name, the Babyface Pro FS is the smallest in RME’s range of audio interfaces. Now into its third generation, the Babyface Pro FS remains the standard for professional mobile recording – exquisitely engineered throughout, with top-class AD/DA converters, pristine microphone preamps, and extensive routing and mixing control via TotalMix FX.

Further innovation comes in the form of improved headphone amplifiers and SteadyClock FS (both of which have been taken from the award-winning ADI-2 Series), reducing noise a step further and once again improving the sound quality throughout.

In this video from NAMM 2020, Product Specialist Adrian Lehmann takes us through the many features of this professional USB bus-powered audio interface for Mac, PC and iOS.

Like all RME audio interfaces, the Babyface Pro FS has been designed with professional users in mind. The focus is on flawless sound quality, super low-latency with all DAWs, being OS-agnostic and ultra-reliabile, with drivers that are regularly acknowledged as the best in the industry. The feature set allows for complete control over all inputs and outputs via TotalMix FX, with assignable shortcut keys and standalone operation for ease of use when recording on the move. 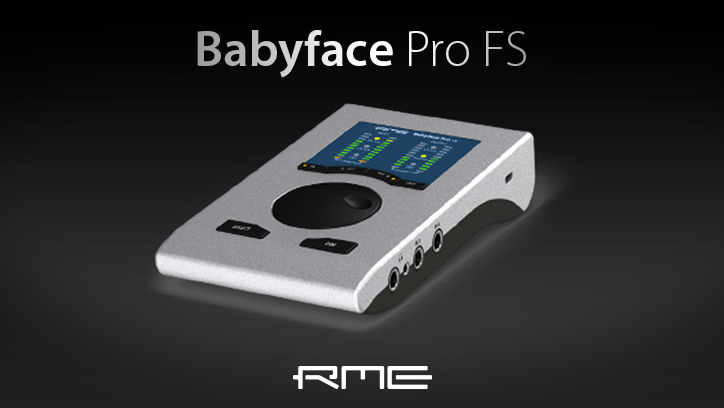 The FemtoSecond Clocking provides an incredibly accurate digital clock – by supressing jitter values down to the femtosecond, both the recording and monitoring of the Babyface Pro FS is extremely accurate, particularly in reproducing higher frequencies and the stereo field. The result is recordings with more detail and depth; for monitoring, a more detailed sound stage, with better separation of instruments when mixing.

This ‘FS’ clock even has the ability to breathe new life into older digital equipment – with the Babyface Pro FS set as the master, instruments and audio devices with less than ideal clocks can have their signal ‘cleaned’ by syncing to the interface’s stellar clocking technology.

All RME audio interfaces also include the powerful mixing and routing software TotalMix FX, with equal performance on Mac, PC and iPad. Support and updates are traditionally provided for years after a product’s original release date (including discontinued products dating back to 2001), meaning that RME interfaces will continue to work flawlessly with the latest operating systems (e.g. Mac OS Catalina and Windows 10).

With many manufacturers seemingly following a practise of giving their devices shorter and shorter shelf-lives, this philosophy allows RME to stand out from the crowd, and it’s for this reason that their devices continue to be relied upon by professional engineers around the world working, whether in live audio, recording studios, broadcast or scientific applications (measurement testing).