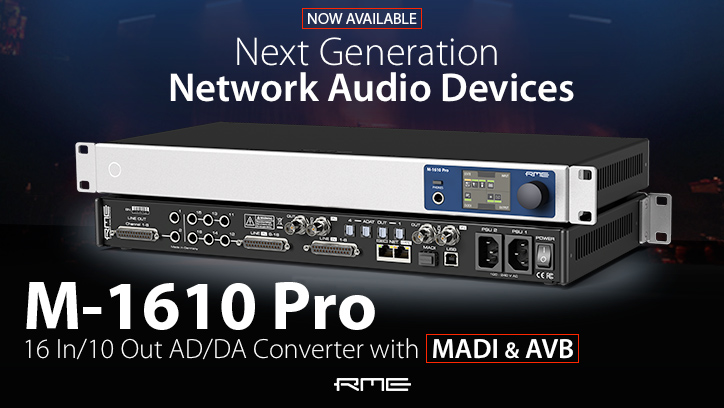 First announced at NAMM 2020, the M-1610 Pro combines the outstanding performance of RME’s M-32 Pro AD and DA converters into a single 1U unit.

Additional flexibility is provided by the integrated AVB interface, offering two redundant Gigabit Ethernet ports for synchronised and prioritised transmission of up to 8 AVB streams (up to 16 channels per stream), with a total of 128 channels.

Finally redundant power supplies offer automatic failsafe for live and ‘mission critical’ applications, making the M-1610 Pro one of the most versatile and powerful professional audio converters on the market.

Like all new RME devices, the M-1610 Pro features SteadyClock FS, RME’s latest digital clocking and jitter rejection technology, which can be used as a clock master in any digital audio system.

Originally developed for the award-winning ADI-2 Series of converters, RME’s femtosecond clock is accurate to 10-15 (or one quadrillionth) of a second, reducing intrinsic jitter (when converting from and to analogue, over all digital formats) to a new all-time low.

The M-1610 Pro’s front panels houses controls for all of the device’s functionality via a large pushable encoder, with a TFT display for selecting controls and settings, including routing and the saving and loading of presets. A dedicated headphone button allows for instant monitoring of any incoming signal. 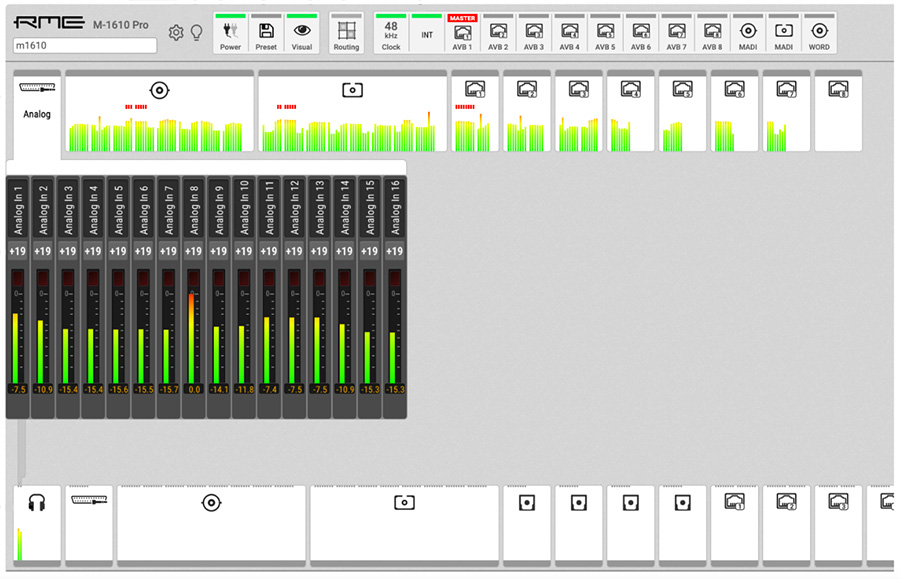 In addition to the front panel, the RME M-1610 Pro is also controllable via the browser-based web remote.

With a flexible and user-friendly interface, the web remote provides extended control of the M-1610 Pro’s many features such as adjusting input reference levels; channel routing for all analogue and digital I/O; changing Word Clock and sample rate settings; and saving / recalling presets.

Connection to the web remote can be made via AVB, or via USB when not using the M-1610 Pro as part of an AVB network.

From the company’s beginnings in manufacturing cutting-edge PCI and Firewire technologies, to developing industry-leading USB and MADI solutions, RME now turns its attention to setting new standards in the field of AVB, offering professional audio users a selection of ultra-reliable and future-proof devices designed for the next decade.