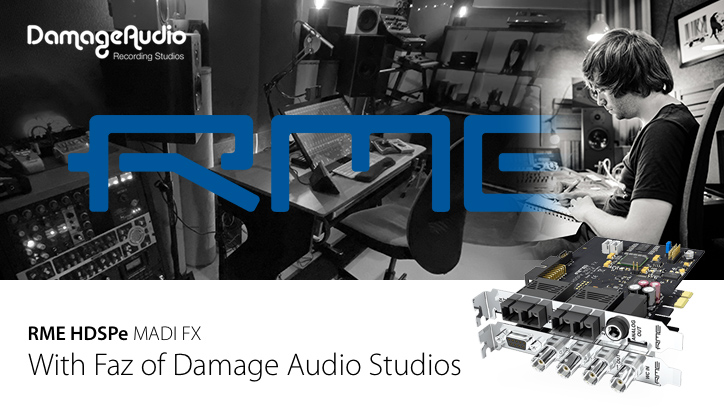 Ben ‘Faz’ Farestvedt is a producer and mix engineer who runs the Damage Audio studio in Bedford. Having started out as a touring musician and FOH engineer, these days he spends most of his time in the studio, producing and engineering long-standing artists such as The Blockheads (Ian Dury) & Tomirae Brown (James Brown Band), as well as helping to develop and build the careers of newer names such as Don Broco, Sarpa Salpa, The Scruff & Low Girl.

As part of a major refurbishment to the Damage Audio studios, Faz recently upgraded his main recording rig to an RME HDSPe MADI FX, and we were keen to get his thoughts about RME’s triple-MADI PCIe sound card – including how it’s allowed him to completely swap out his console, with a recording workflow now solely based around RME’s TotalMix FX software mixer (and an ARC USB for monitor control). 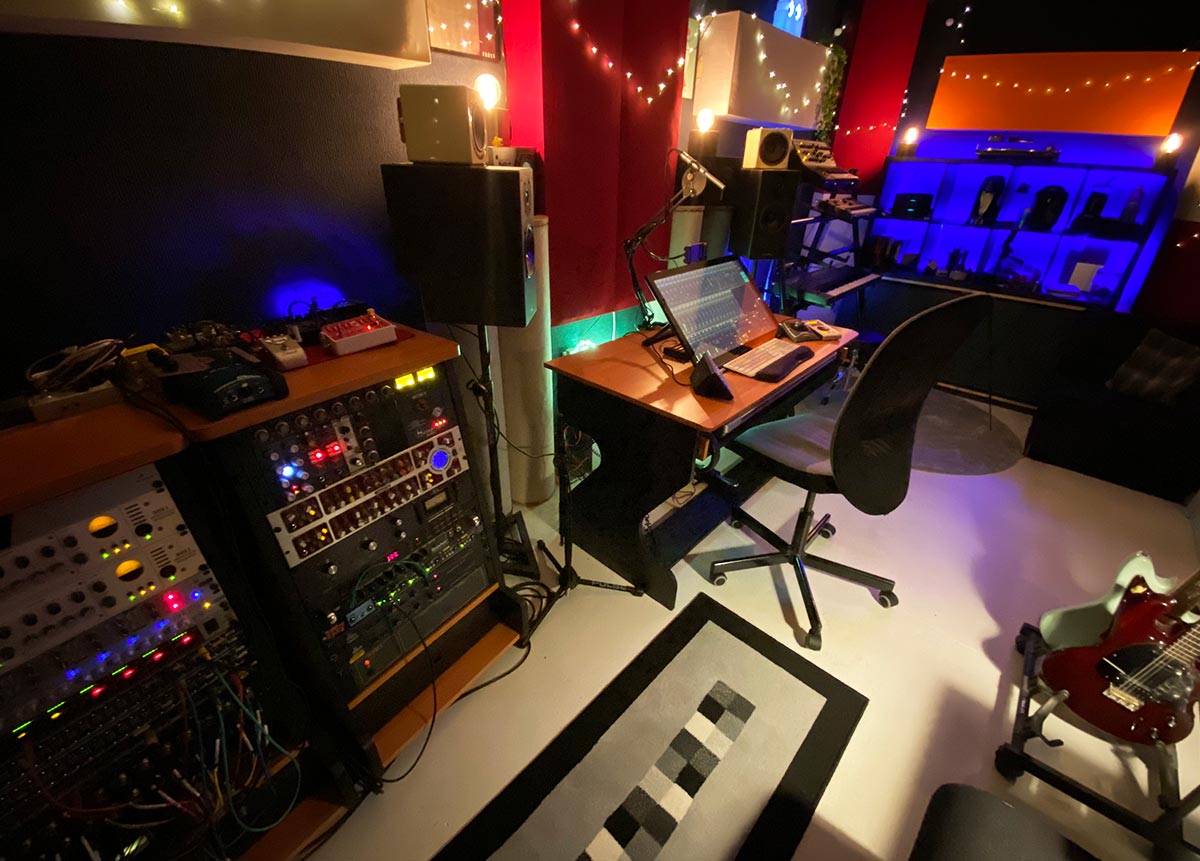 “I’m a freelance producer, arranger and engineer,” Faz tells us. “I’ve had a long history in touring as a musician and front of house sound engineer. On the road I’ve had the pleasure of travelling the world with Fujiya and Miyagi, Roger Daltrey, London Grammar and Wilko Johnson, amongst many others.”

“These days I’m fully grounded as a producer, mostly working out of my own studio Damage Audio, which recently went under a large and much needed overhaul. For the first time in my career I’m running a fully modular ‘console-less’ setup”

“Whilst the recording process is super important to me, really the creation of music is the heart of the studio and my work, and 3 meters of mixing console just didn’t seem like the most practical use of space! My control room is primarily used as a writing space, and I want it to be centred around creativity, speed, and accessibility to anyone attending.”

“RME came highly recommended from a lot of peers.
I’ve never heard a bad word said about any RME products”

“So many studios are packed with gear that only one person in the room knows how to use. I don’t feel that’s giving a fair experience to visiting musicians or clients – and in many cases can even be detrimental to results – so I’ve tried to create a space that anyone can use.”

“What really allowed this all to happen – and without losing the functionality of having a physical console – was the RME HDSPe MADI FX.” 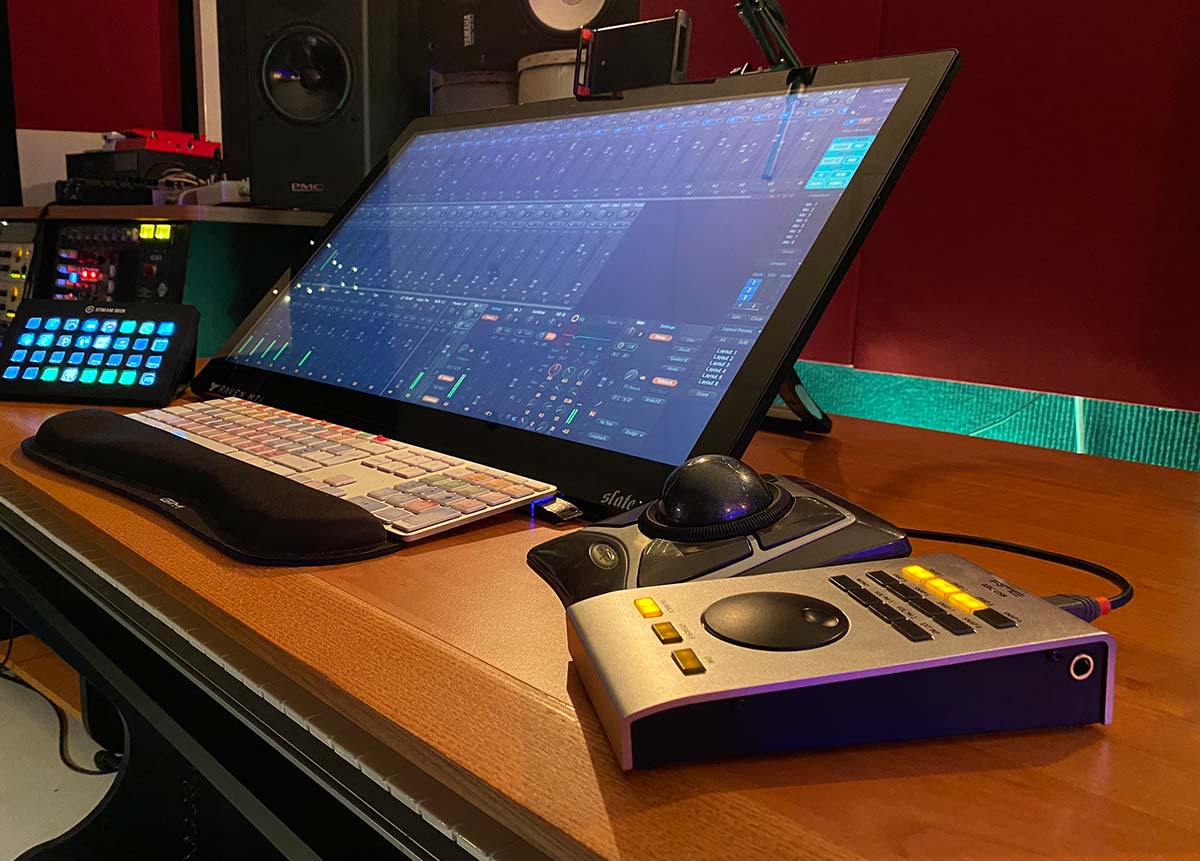 The RME HDSPe MADI FX is PCI Express sound card capable of a whopping 390 discrete channels of audio. Part of RME’s extensive line of MADI products, the HDSPe MADI FX is perfect for recording studios and live audio installations who need to work with extremely high-channel counts, and at super low-latency.

(For those enquiring minds, check out the recent RME Livestream with Adrian and Joost of RME Germany for a great discussion of latency with RME devices!)

The FX section also adds the usual TotalMix FX additions, such as EQ and Dynamics on every channel, and can run up to 98 fully independent stereo submixes (equivalent to 196 Aux sends on an analogue mixing console), including the routing and distribution of audio signals to multiple outputs at a time.

“The MADI FX is now the heart of the studio,” continues Faz. “I use it as a master clock for the system, interfacing digital audio, routing, cue mixes, MIDI interfacing. Anything to do with getting sound in and out of the computer. Everything is controlled via Totalmix FX on a touch screen – it’s like running a large format digital console but without losing the half of the room. The addition of a headphone amp is a nice touch too, and it sounds great!”

“I also have an ARC USB which is acting as a monitor controller. Monitor controllers get expensive quickly; largely because transparent sound comes at a price. The ARC being a digital controller simply cannot have a sound – what hits the speakers is what leaves the converter. It’s amazing really – DA, Cable, Speaker – it’s the purest path you can have, and much more affordable.”

“The ARC is also highly customisable which allows me to move very quickly. When recording live bands, it’s really handy to be able to solo the DAW returns on playback (in case the singer decides to try their hand at drumming between takes!). Also a lot of ‘sonic experiments; go on here – vocals through guitar amps, drums through pedals, all of the ‘wrong’ things – and accidents get loud quickly! Having quick access to mute groups is invaluable.” 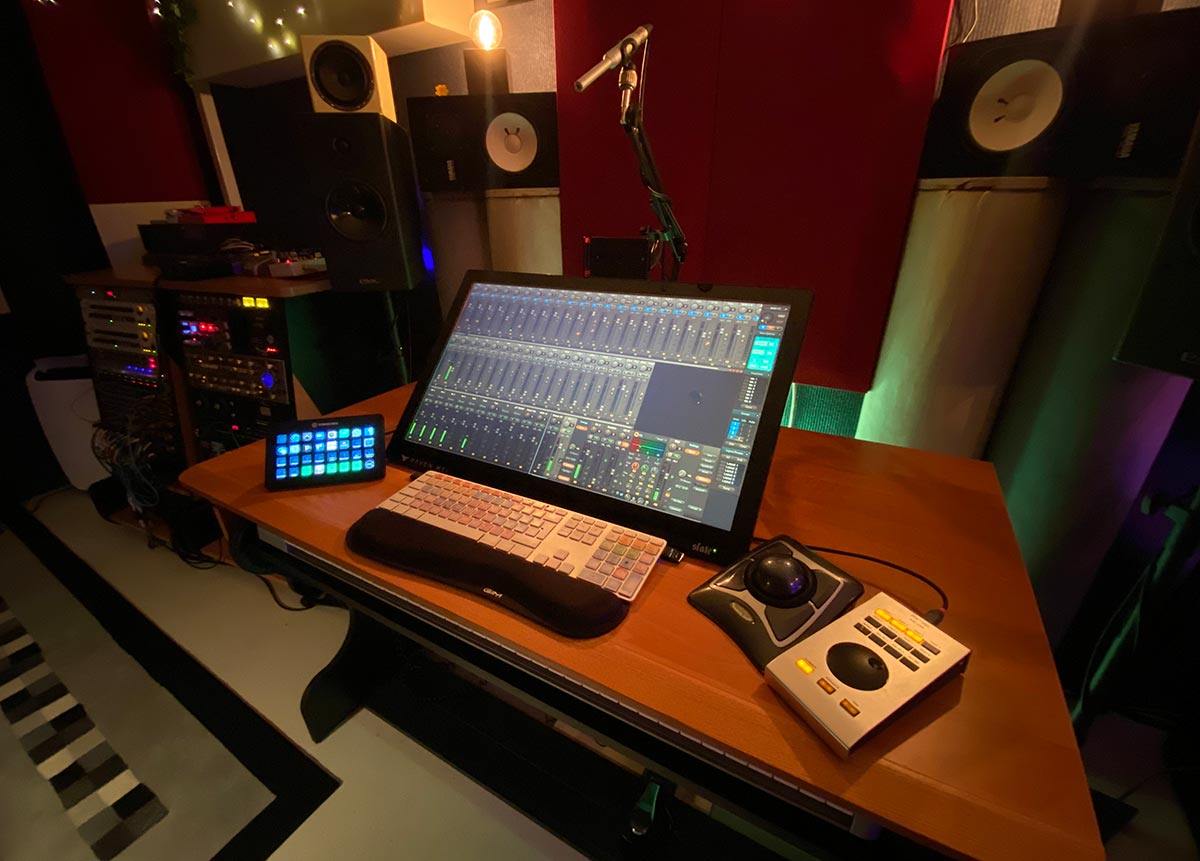 “I used to hire the Fireface interfaces when doing location recordings. They’re fantastic – rock solid, great features, reliable and minimal setup. I’d be able to set up a rig on site, install the drivers and be up and running in minutes. They never drop a beat.”

“Reliability in digital audio is everything, and RME gear is second to none. Super stable – I’ve yet to experience a single glitch. Really, digital equipment is something that should be forgotten when out of sight. If I don’t look at TotalMix then I forget the gear even exists – which is exactly as it should be.”

“Feature wise – I’ve yet to find anything that I can’t achieve. RME really thought of everything when making these tools.”

“RME gear is second to none. Super stable – I’ve yet to experience a single glitch”

“The most important thing for me is that I can just get to work without worrying about gear. I’m always juggling dozens of projects, and there isn’t time in the day to be concerned with resetting drivers or clocking. It’s also great to be in the knowledge that if anything does comes up then RME and Synthax have my back and can get me back up and running again, no stress.” 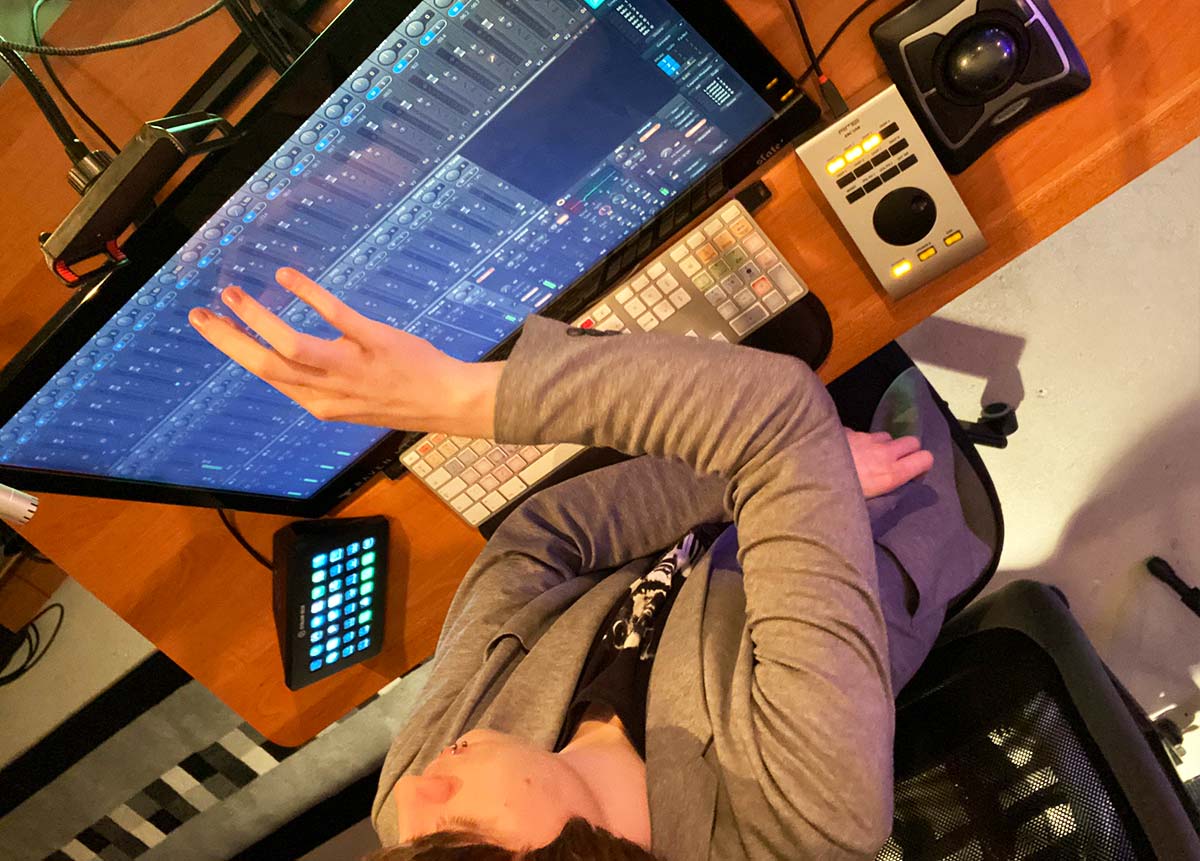 “As I mentioned already, TotalMix FX has been a direct replacement for my console. I use it in exactly the same manner, and use every part of it.”

“For the most part it caters for cue mixes, monitor switching and routing, but I also make a lot of use of the DSP processing. I’ll happily use the EQ for tracking and print the result – it’s so useful to have for cutting live drums. Speaking of EQ, I’m also using it on my outputs to tune my speakers and room. As the bands are fully parametric they’re ideal for the job.”

“The loopback function is also great to have, and means I can use less software in my setup. I do a lot of remote writing, pre-production and mix sessions, and being able to buss signals and bring them back to the inputs means I can easily stream various sources over video calls. My talkback mic works as my Zoom mic in this setup – it’s so great having all my day-to-day audio tasks streamlined like this. Less thinking, more doing! Using the same setup video content creation is also much simpler, as you can also route audio back to apps like OBS for capture.” 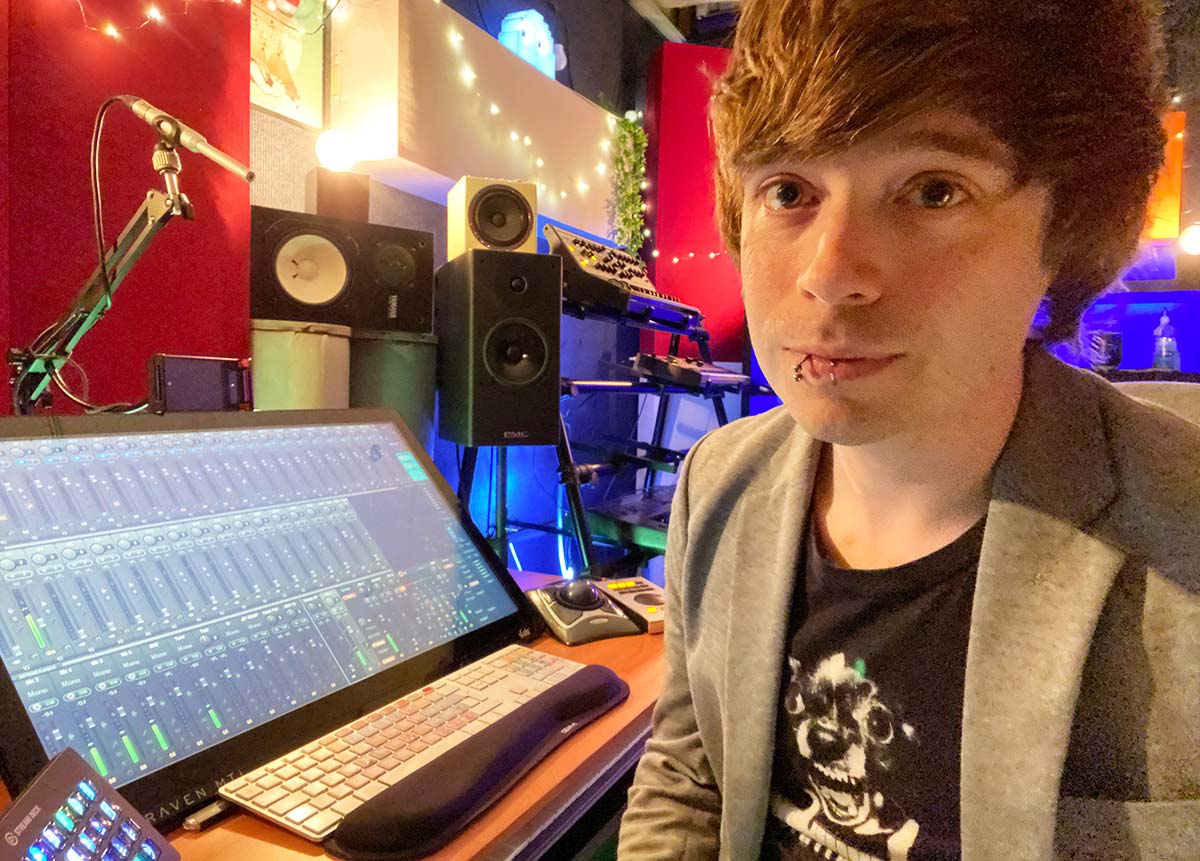 “RME came highly recommended from a lot of peers. I’ve never heard a bad word said about any RME products or customer service, which is rare given the audio communities heavily opinionated nature.”

“So it was a no-brainer really. Everything I needed, and even things I hadn’t considered possible, are easily accessible with this system. I needed some very specific functionality from this rig, and my previous supplier simply couldn’t cater for my needs. RME was the only manufacturer that could cover everything I needed and so much more.”

Find out more about the RME HDSPe MADI FX

Find out more about the RME ARC USB