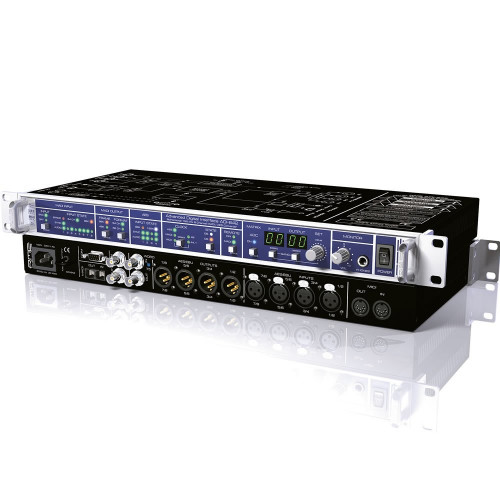 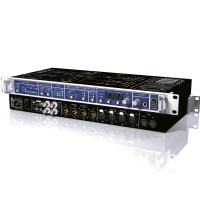 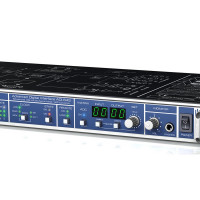 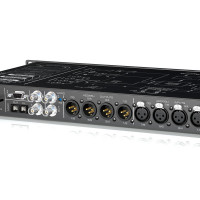 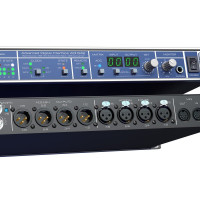 To purchase this product please:

Please note that this product has been discontinued - contact us for altnerative solutions.

The ADI-642, an 8-Channel format converter from MADI to AES and vice versa, is the latest addition to RMEs successful MADI series. Amongst other applications, the unit can serve as ideal AES/EBU frontend for the Hammerfall DSP MADI PCI card. Up to 192 kHz at 24-Bit are supported. Its most outstanding feature is an easy-to-use 72 x 74 routing matrix, which can assign an individual input channel to every single output channel, allowing free configuration of all 64 MADI channels and the 8 AES channels. Additional features include:

The compact unit with 19" width and 1 unit height serves as format converter MADI to/from AES ( Schematic View). MADI handles 64 channels of 24-Bit audio at sampling frequencies up to 48kHz, 32 channels up to 96kHz, and 16 channels up to 192kHz. All channels are transferred across a single cable, either coaxial (BNC) or optical network cable. In both cases, cable lengths of more than 100 meters can be achieved. The AES/EBU channels are provided via 4 XLR inputs and outputs, respectively. The ADI-642 accepts 56 channels and 64 channels as well as 96k frame at its input, and can be set to generate those formats at its output. This way the ADI-642 even serves as perfect interface between otherwise incompatible MADI devices.

A fully automatic input selection between optical and coaxial input offers a useful redundancy mode for critical applications. Extensive status displays give information about Lock and Sync states, audio content and the physical quality of the incoming signal.

The ADI-642 supplies word clock in Single, Double and Quad Speed, distributes Double Wire 96kHz signals into the MADI data stream and to the AES ports, and even supports the double MADI sample rate (96K frame). The SyncAlign® and SyncCheck® technologies known from other RME products ensure perfect synchronization and clear detection of errors. Also, multiple units can be stacked and operated together, using word clock to produce sample-alignment across all units. All settings are stored when the unit is switched off.

Additionally the ADI-642 features an easy-to-use 72 x 74 Matrix Router. An input signal can be assigned to every output channel, both for AES and MADI. This not only allows free signal routing during format conversion, but also forwarding and routing of signals within the same format. An input signal can also be distributed to any number of outputs. With more than one ADI-642, several MADI signals can be combined (merged) to one MADI stream.

16 MIDI channels can be transferred across MADI (even with 64 audio channels). The device can be fully remote controlled and configured via MIDI, and all status displays can be queried through MIDI. Each ADI-642 can be given a separate ID, allowing separate remote controllability of various devices with only one MIDI channel.

RME's SteadyClock(TM) lets the ADI-642 use MADI without an additional word clock connection, and guarantees excellent clock quality in every situation. Due to the highly efficient jitter reduction, any clock signal (even AES and Word Clock) can be improved and refreshed, and subsequently be used as reference clock at the word clock output. Intelligent Clock Control (ICC) will retain the last valid sample frequency in case of a loss of the input signal.

The analogue monitor output operates in stereo and has a low impedance. It can be used as line and headphone output and supports 192 kHz at 112 dBA SNR. The routing matrix can assign any of the 36 stereo input pairs to the monitor output.

A typical application example is the use of a HDSP MADI PCI-card in a computer with the ADI-642 as external AES interface (schematic view). As MADI transmits 64 channels, up to eight ADI-642 can be used to provide all 64 channels via 32 AES I/Os.

The integrated Matrix Router makes such a setup easy to be configured. The MADI signal is passed through from device to device. When passing through the MADI signal, a delay of a few samples per ADI-642 occurs, causing the AES inputs and outputs to show an offset.

This problem is fixed by the Automatic Delay Compensation. Each ADI-642 automatically detects which unit it is within the chain, and corrects the AES input and output data so that all AES I/Os operate sample-aligned. The additional Auto Configuration mode sets up all ADI-642 to use consecutive AES I/Os. A manual configuration via each unit's Matrix is not required.

The ADI-642 is compatible to MADI interfaces of companies like Sony, Merging, Lawo, Euphonix, Stagetec, Jünger, Audio Service, AMS and others. 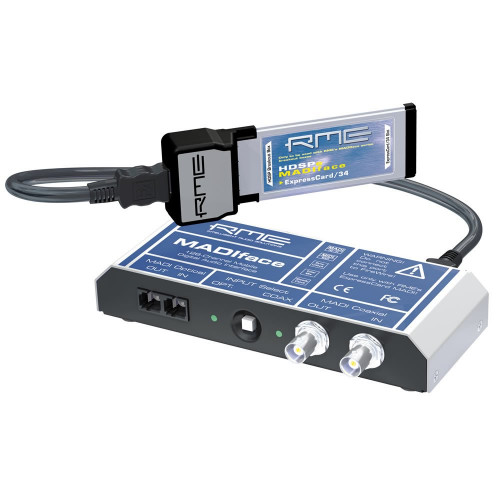 Please note that this product has been discontinued.For the latest version see the RME MADIface USB ... 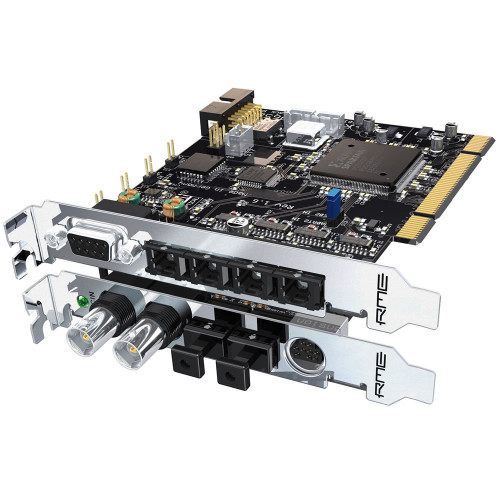 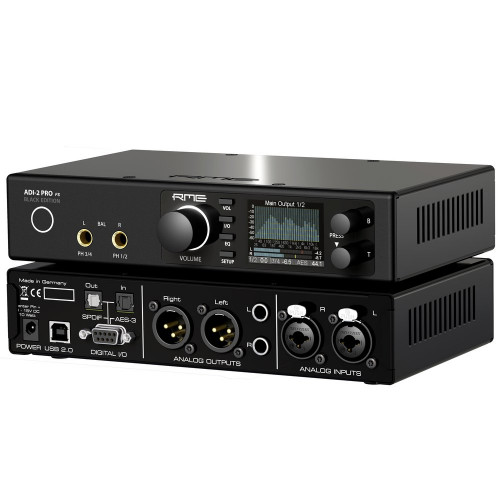 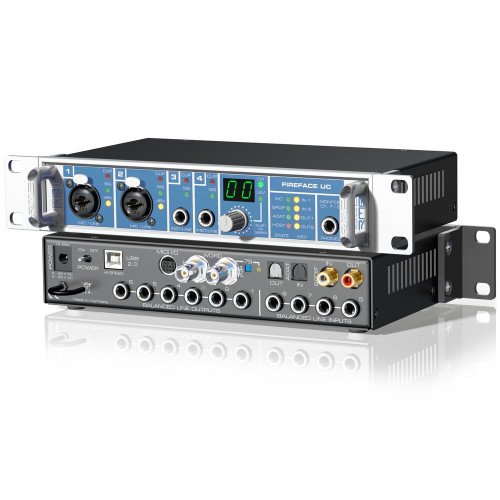 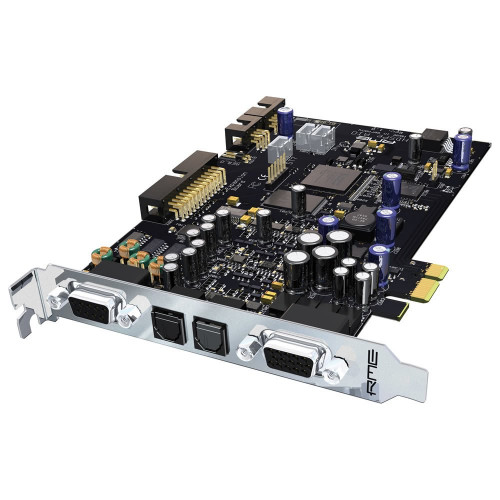 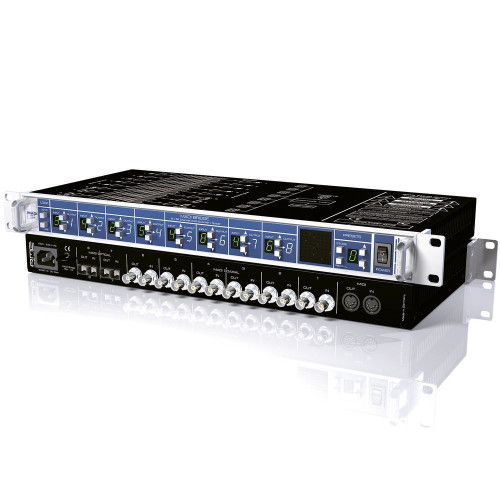 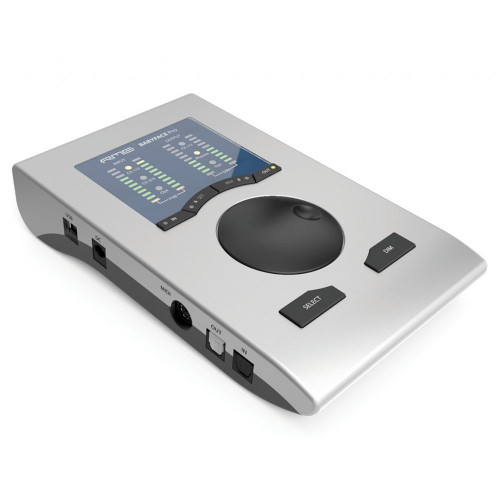 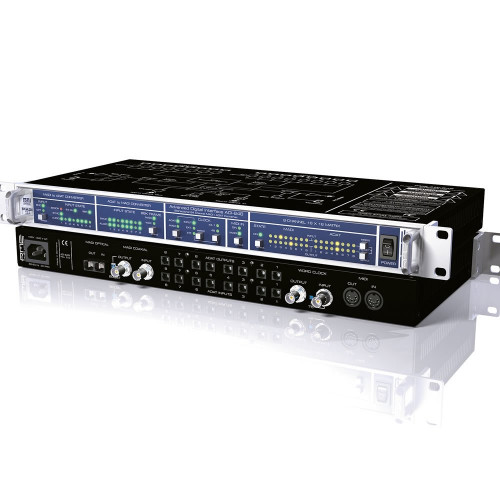 64-Channel 192 kHz ADAT/MADI Format Converter Please note that this product has been disconti... 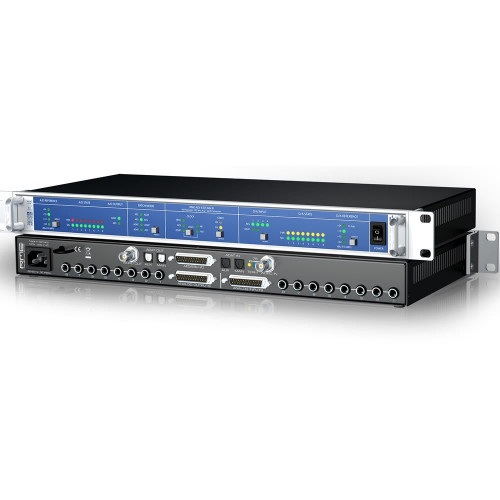 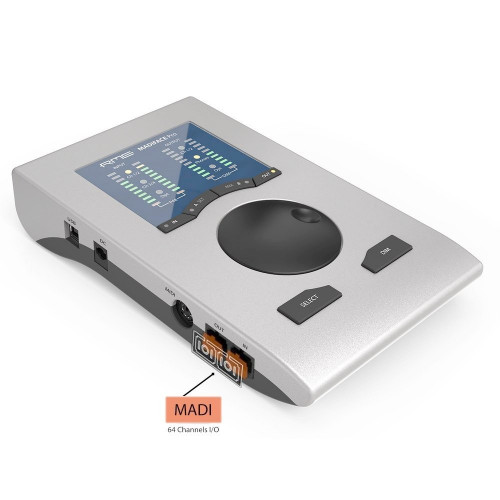 Unrivalled Expandability in a Desktop Interface Please note that the RME MADIface Pro has been ...