Home Latest RME at the Institute of Sound and Vibration Research, University of Southampton

RME at the Institute of Sound and Vibration Research, University of Southampton 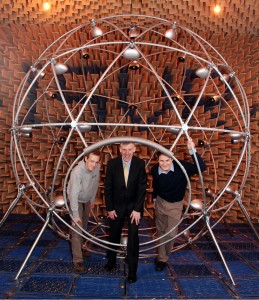 RME at the ISVR University of Southampton

We all like to take time and experiment with mic techniques to create exciting and interesting sound-fields, but Filippo Fazi of the Institute of Sound and Vibration Research at the University of Southampton, takes it to a whole new level. As part of the Fluid Dynamics and Acoustics Group at the institute, Filippo and his colleagues investigate all manner of sound and vibration associated subjects, including innovative noise reduction techniques, new recording and playback techniques, and a lot of very academic investigation into human perception of sound and how it affects us.

Filippo’s main focus at present is to design a Sound-field Reconstruction System in conjunction with partners ETRI (Electronic and Telecommunication Research Institute). They are trying to mathematically model and then reproduce a full 3 dimensional sound-field. Their mathematical approach is to apply techniques from quantum physics to simulate the various audio models available (Ambisonics, etc).  They are using spherical harmonics to represent the radiation pattern from loudspeakers in 3D, and then the standard maths program Mathlab to display the results in 3D via animated graphics.

The team have set up a hemisphere of no less than 40 electret microphones in ISVR’s big anechoic chamber, around each single loudspeaker they wish to test. The speaker is then measured scientifically to produce true 3D plots of frequency against sound level.

In the medium term this data will be used to produce mathematical encoding and decoding formulae which can be used to playback ultra realistic sound fields from just a few speakers, eventually even a stereo domestic set up. To complete the task, ISVR needed a large number of inputs (and later, outputs) to a computer, to capture, and playback all the data.  They needed the data capture to be at the highest quality possible, and they needed the A/D conversion to be close to the array of mics, but be able to run the captured data many tens of metres away to the computer used for recording, which would be in another room, outside the anechoic chamber. 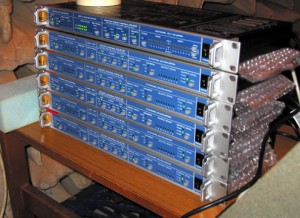 RME at the ISVR University of Southampton

To meet these demanding requirements, IVSR purchased a single RME HDSP MADI card (now discontinued, see the RME HDSPe MADI instead)  to fit into their capture computer, along with an ADI-648, which provided them with 64 ways of ADAT to MADI conversion.  They then added 5 x ADI-8 DS, which altogether convert 40 ways of analogue to digital at 48kHz with extremely transparent response, and this became the A/D rack for the chamber.  The ADI-648 and ADI-8 DS’s have no fans, so this rack is completely silent in operation.  Since MADI can run hundreds of metres over optical without any problem, the link from the chamber to the data capture room was easily completed with a single 20m MADI cable.

Filippo already knew of RME’s excellent reputation for driver stability and audio excellence. But to be absolutely sure, on delivery, Filippo measured the alignment of the first input in the first ADI-8 with the last input of the fifth ADI-8, and he found that they were sample rate accurate across all 40 inputs.  This meant that he could confidently use the system for his scientific measurements.

Since installing the system Filippo has presented his work to the AES in Italy and the IOA Reproduced Sound Conference in the UK, to widespread interest.