More RME on The Voice 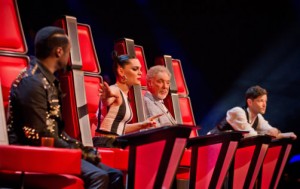 RME was heavily featured in the various racks dotted in and around the many production hubs of this seasons “The Voice”. The BBC talent show featuring judges Jessie J, Sir Tom Jones, Danny O’Donoghue and Will.i.am, was won this weekend by Andrea Begley in front of a viewing audience which averaged 7.24 million.

Filmed at Pinewood Studios, the show has enjoyed a bigger TV audience than last year and is already lining up artistes for next season.

We were invited down to Pinewood a couple of days before the final by Niall Acott who has recorded all of the performances for Universal. This is a particularly demanding show where the live tracks are mixed on the fly, then mastered and available on iTunes almost immediately.

Niall has designed a relatively small set up for The Voice, most of which was supplied by Gavin Miller at Kazbar Systems, and it can be rigged and ready to go within a couple of hours. “We have 2 x 56 MADI feeds coming from the Digico stage racks into the RME MADIBridge on BNC which is then converted to optical and sent off to our (RME) HDSPe MADI FX card in the Mac” explains Niall. “There are 140 lines coming off of stage and we are taking 80 of them at any one time which go to Logic on the Mac.” 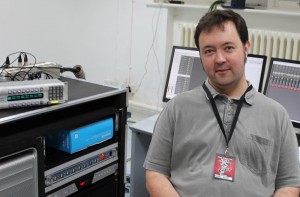 Niall (pictured right) continued “We use Logic on the Mac which works well, actually that (Logic) and Nuendo Live are fantastic. In fact, Nuendo Live created 194 channels and dropped into record seamlessly, I didn’t complain once.”

“Then from the card (RME HDSPe MADI FX) we have a MADI output which is feeding the MADI inputs on the Orion interface, and there are 40 outputs, 24 analogue and 16 ADAT, feeding the Yamaha DM1000. We mix the show live from those 40 channels with a few effects and it is uploaded and sent directly to mastering. So, it’s essentially an old fashioned stereo live mix.”

Niall commented “It’s such a compact set up now. If I was to look at the next best way of doing it, it would be a lot bulkier and considerably more expensive.” 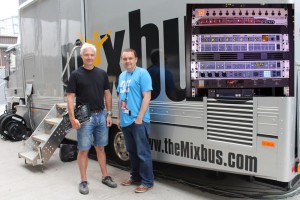 As we were finishing, Conrad Fletcher from SounDesign ltd (pictured left with Kevin Duff) popped his head around the corner and invited Niall and myself onto his new MixBus. This new mobile facility features the Studer Vista 8 console along with a fully featured Barefoot monitoring system which also uses an RME Fireface UFX for some X-Curve duties. And Kevin Duff was at the MixBus helm for The Voice.

Conrad showed us the main rack (inserted on picture to right) which was packed with RME including an ADI-642, a MADIBridge, a MADI Converter and a Fireface UFX. 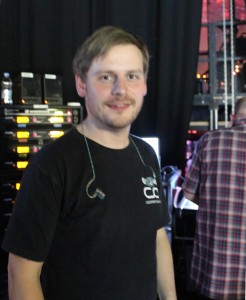 We hope to catch up with Conrad in the summer for a very special event and to find out more about how the MixBus operates.

And if that wasn’t enough RME for a show, I then bumped into FOH and monitor engineer, John Gale of Galeforce Sound (pictured right) who was running an RME MADIface off of his Digico SD7.

There is an RME Premium solution for virtually any MADI workflow or problem. If you want more information or a demo, contact us on 01727 821 870 or at info@synthax.co.uk.