Home Latest Ferrofish A32 and RME on tour with Ellie Goulding

Ferrofish A32 and RME on tour with Ellie Goulding 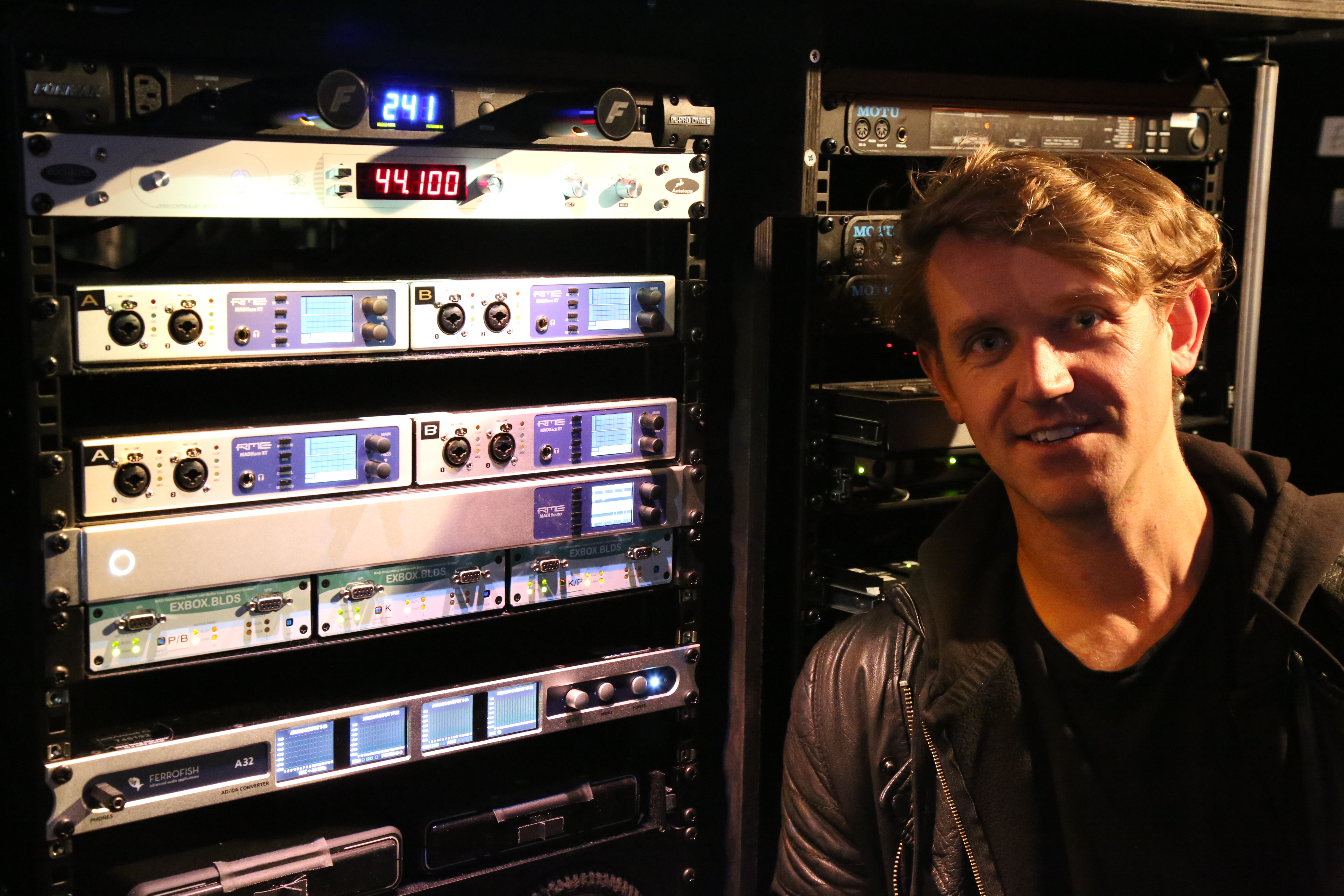 MIDI and playback tech Will Sanderson with the latest additions to the playback rig for Ellie Goulding’s tour, which features the new Ferrofish A32

Synthax Audio UK was recently invited to the O2 Arena in London for the last leg of Ellie Goulding’s European Tour. MIDI and playback technician Will Sanderson was on hand to tell us why the team chose the new Ferrofish A32 AD/DA converter for the show’s keyboard and playback rig, along with the RME MADIface XT.

Having just finished performing across Europe, Ellie Goulding is about to embark on the next part of her world tour, with dates in the USA, Australia, New Zealand and Asia. With such a demanding tour schedule, the decision was made to upgrade the keyboard and playback rigs with the latest technology from Ferrofish and RME. The team was looking for something that would provide sound quality and flexibility, but would also be able to withstand the rigours of life on the road.

Will Sanderson, MIDI, playback and keyboards technician for the tour, played a major role in designing the new system. He was kind enough to speak to us about the new setup.

“The aim was to design a system that would handle keyboard sounds, electronic drum sounds, playback, autocue and timecode, whilst allowing the musical director and the musicians in the band to have free reign with their sound design, and full control of it during the show from on stage. This is an extensive touring campaign, and the show will naturally develop during that time. So I knew it would need to sound great and be robust, but also be flexible enough to handle any changes or developments as the campaign progressed. With so many elements of the show connected to this rig it could not be the weak link.”

“We needed something that was going to be robust and not compromise on sound or build quality, and that wouldn’t hold us back. “

Will then went on to explain some of the considerations for designing the new system, discussing what the team was looking for and why these choices were made.

“I’m very lucky that Ellie Goulding’s musical director Joe Clegg, and the musicians in the band, are similar to me in that they embrace new technology. So together we’ve designed a rig that allows us to explore the creative and technical possibilities. The band are all expert sound designers and very hands-on with the software side of this rig, so I needed to select hardware that would not compromise their workflow and give them the performance they need whilst also offering the quality, reliability and flexibility that I need on the road. For what we need, the RME and Ferrofish combination was a natural choice.”

The Ferrofish A32 features both ADAT and MADI functionality.

“The MADI interfaces and switchers that have come through recently have been real game changers for playback systems and I’m seeing them more and more on the road. Our system fully embraces that technology and is an upgrade from our previous system in terms of channel count, flexibility and reliability, and gives us a lot more options in how we’re able to run the show.

This system is more than simply playback though. It neatly handles all of our keyboard sounds, electronic drum sounds, playback, autocue and timecode. In the end, we went for 4x RME MADIface XT units, the RME MADI Router, DirectOut EXBOX.BLDS MADI switchers (for auto-switching redundancy) and the Ferrofish A32.

“The sound quality of the Ferrofish A32 is fantastic, and in terms of usability it couldn’t have been easier.”

The sound quality of the Ferrofish A32 is fantastic, and in terms of usability it couldn’t have been easier. We were one of the first people to get hold of it, and we didn’t have a lot of time for extensive testing. I’d used the Ferrofish A16 before so I had an idea how it might work. But it really was a case of just unboxing it, bolting it into the rack, turning it on, and it worked straight away exactly as you’d think it should. It’s a very well thought out and intuitive piece of kit. I’m sure we’re only using it for a fraction of its capabilities, but for our needs it couldn’t be better. 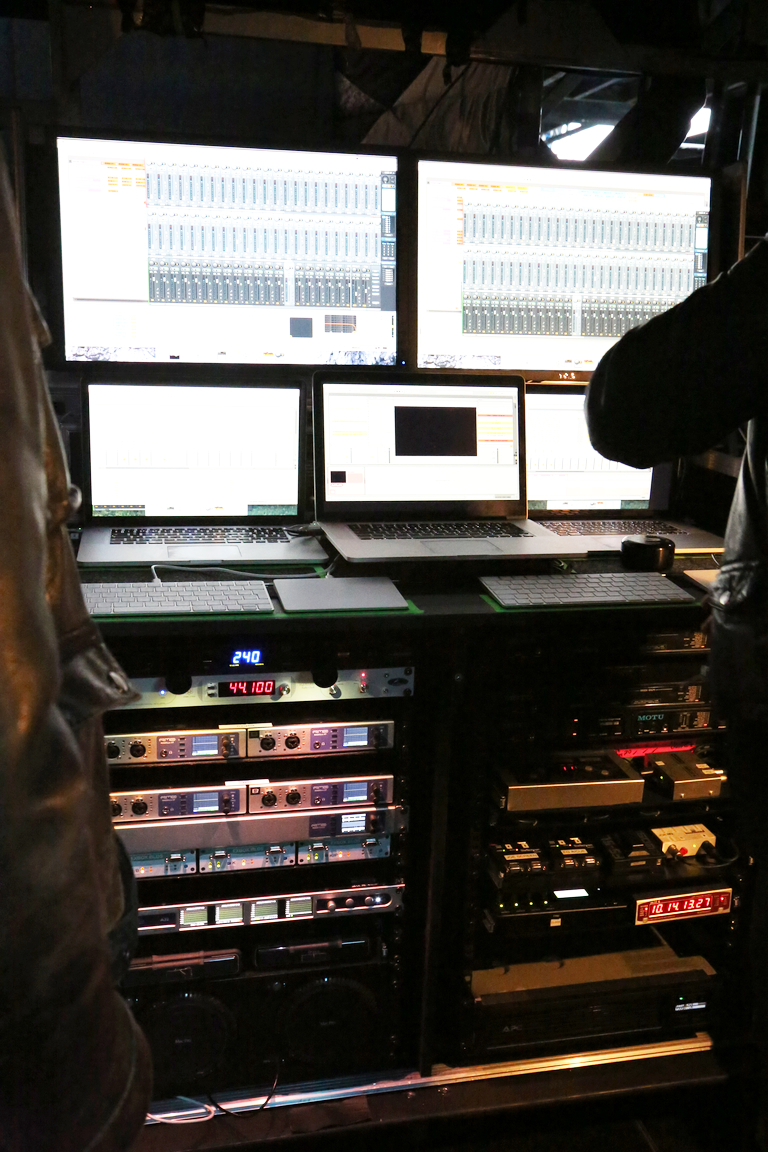 Backstage at the 02, with RME and Ferrofish in the rack

With other artists I’ve worked with I’d had a lot of success using RME products, so I knew that they’d work well. We needed something that was going to be robust, not compromise on sound or build quality, and give us the flexibility we require. It needed to be scalable up and down for different touring requirements, all of which play their part in a campaign such as this.”

Will also clarified why they chose to go with the RME MADIface XT over the smaller RME MADIface USB, which the team had also considered.

“There’s a couple of reasons. The RME MADIface USB interfaces are great as they’re so compact, but this rig was never going to be a carry-on fly rig so size was less important. One reason for choosing the XT is that there’s a visual display on the unit itself, which speeds up problem diagnosis during a show. The other is that I have the option to run them from the thunderbolt port via an adapter, in case I want to free up the USB architecture within the computer should it need to focus solely on MIDI. I had very limited time for testing this rig, so choosing the XT units was really a case of pre-emptive problem solving at the design stage.

Using MADI has given me extra flexibility and more sophisticated channel routing options. We were quite ambitious with what we wanted to achieve regarding channel routing, and it was these specific products that enabled us to commit to a design without having to feel constricted by hardware specifications. With this set up, if we can think of it, we can make it happen, which is an exciting place to be.” 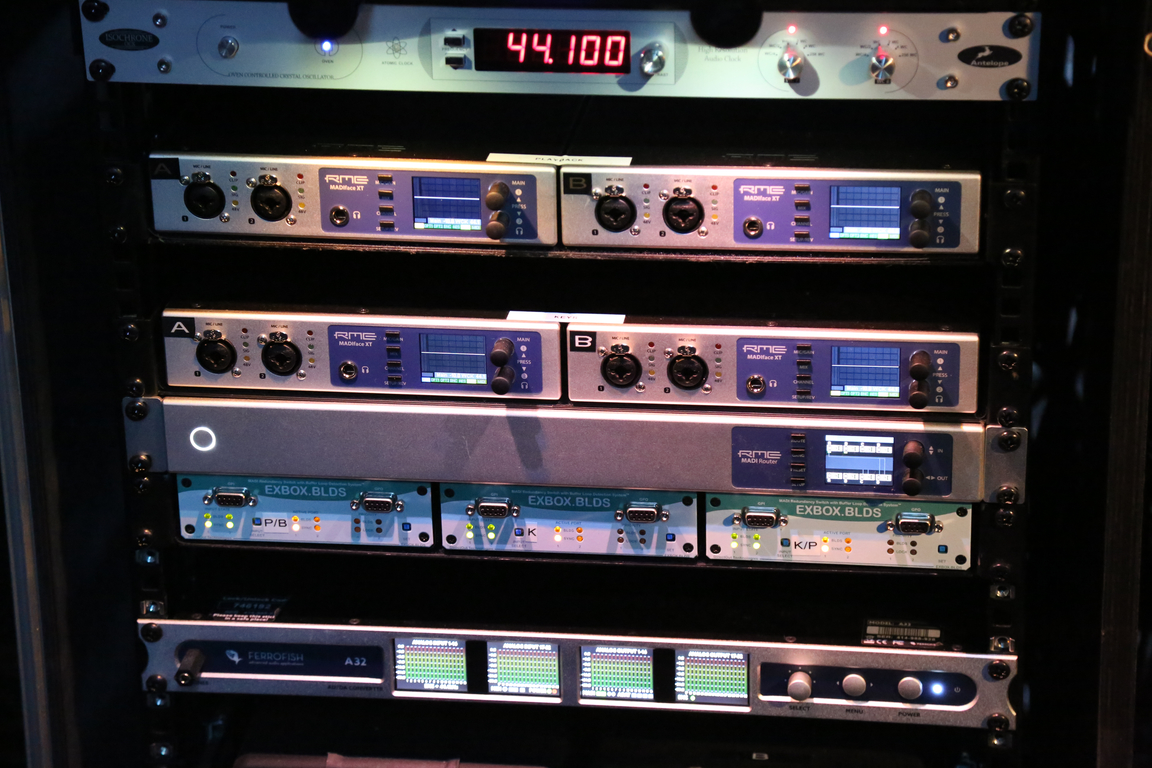 In the rack: 4x RME MADIface XT and the new Ferrofish A32 AD/DA Converter

Will went on to speak about the importance of having redundancy options in a live playback rig. The team is using two duplicate playback and keyboard rigs, ensuring that if a fault were to occur during a show, the backup rigs would immediately take over, meaning no drop-outs in the audio.

“There are two sides to this system – a keyboard rig and a playback rig, which also provides all of our electronic drum sounds, and timecode which gets sent out to FOH, Lighting and Video departments.

Both sides to the rig have redundant back-up systems but I also wanted the flexibility to be able to run the keyboard rig from the playback rig, if required. I always like to have different options available so the show will continue no matter what happens.

The extra security provided by this system then breeds confidence in the rig, not only for myself but also for the band up on stage who rely on this system every night.

“If we can think of it, we can make it happen, which is an exciting place to be.”

Finally, Will gave us an insight into how the show works onstage.

“The rig is offstage, and controlled remotely by the band on stage, who are in total control of the show. We have 5 keyboards and 2 sample pads, plus 9 drum triggers on the drum kit – all of which communicate directly with this system via MIDI. I’m really just monitoring the rig during the show, although I can make adjustments on the fly as required.

The tour is an extensive one. We’ve just finished touring Europe and the UK, we’re here in the O2 for two nights which marks the finale of our UK tour, then we’re straight off to America for three months, before embarking on festival runs, then off to Australia and New Zealand and into Asia as well. This rig will be travelling round the world with us so I had to pick products that would be robust – there are many miles and many shows ahead of it!”

Our thanks to Will Sanderson. To keep up to date with Ellie Goulding, visit her website here.

If you’d like to know more about any of the products mentioned in this article, please contact us, or call 01727 821 870 to speak to one of our team.

Find out more about the Ferrofish A32

Find out more about the RME MADIface XT