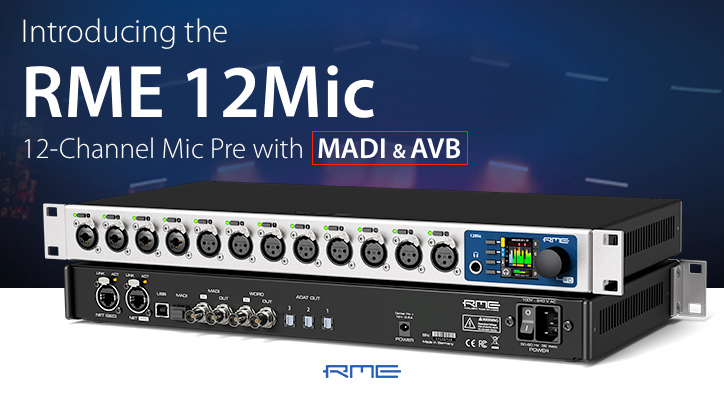 We take a look at RME’s new 12Mic, an AVB-capable 12-channel mic pre designed for the next decade.

For more than a decade, RME has been designing and manufacturing microphone preamplifiers to the highest standard.

Specialising in MADI-equipped multi-channel preamps for the live, studio and broadcast communities, RME’s OctaMic and Micstasy preamps have been used on countless high-profile recordings around the world, including several Grammy award-winning recordings.

Now with the new RME 12Mic, the next-generation of microphone preamps has arrived, once again bringing reference-class specifications and impeccable sound quality to professional audio applications.

Accepting signals of up to +18 dBu, the PAD-free microphone input stages offer an exceptional signal-to-noise ratio of 120 dBA after AD conversion, and provide 75 dB of gain on every channel.

The 12Mic’s front panel has been designed and optimised for both speed and usability. A TFT display provides accurate level metering, with a colour sequence of green, yellow, amber and red for checking levels at a glance.

All controls and device states can be operated directly from the front panel, making the 12Mic fully configurable via a menu system that is both straightforward to use, and easy to navigate.

Four control buttons, which change their function depending on the currently selected feature, plus an encoder allow for rapid control over the 12Mic’s full list of functions.

For example, channels can be grouped together to create Gain Groups, making it easy to adjust the level of multiple microphones simultaneously via the main encoder, as well as remotely via RME’s browser-based control software.

Simply click the channel you want to start a group with and hold the + button on the display, then select the channels you want to add to the group. You can now easily increase or decrease the gain for this entire group, making it easy to adjust an entire set of microphones when recording a drum kit, or multiple overheads when recording an ensemble.

Channels can also easily be routed to the headphone output for quickly line-checking any of the 12Mic’s analogue and digital I/O, and phantom power can be switched on or off via the button above each XLR input.

Other features accessible via the front panel include adjustable settings for Wordclock, information regarding active MADI and AVB streams, plus the ability to save and load up 15 presets. 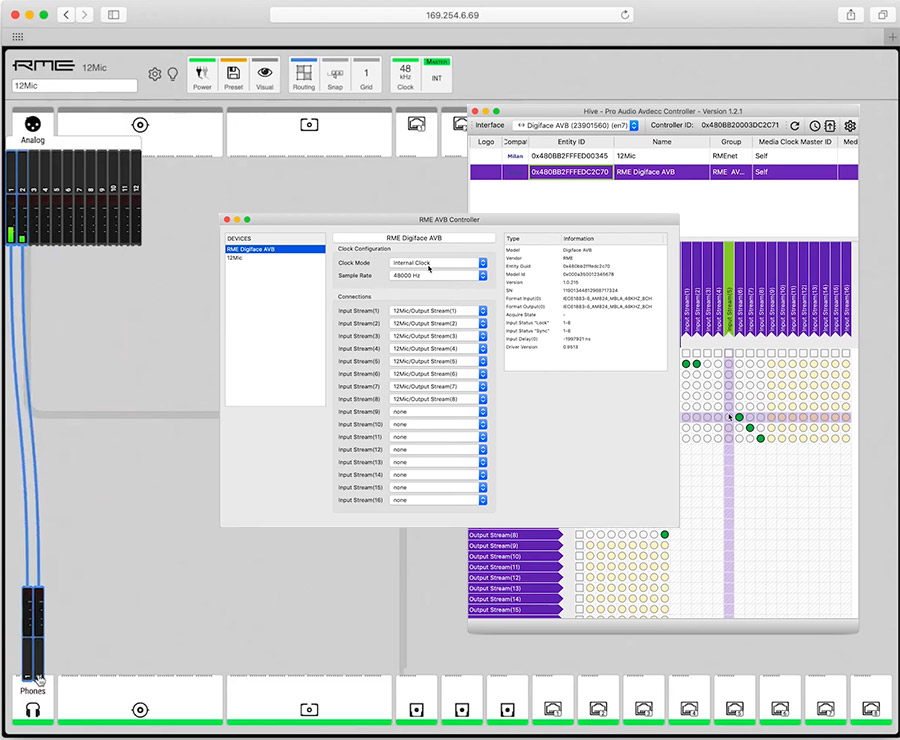 The RME AVB Core meticulously implements the IEEE standards for audio streaming, discovery and control, and includes support for the standards set out by Avnu Alliance’s ‘Milan’ (Media-integrated local area network), a specification that ensures devices from different AVB-implementing manufacturers will operate harmoniously with one another.

All of RME’s AVB devices can be discovered and controlled by any AVB controller, and any signal reaching the 12Mic can be routed and streamed over a deterministic network with fixed latency and guaranteed bandwidth – no switch configuration required!

An optional MADI SFP module can also be added to provide MADI optical I/O, as well as offering MADI redundancy when used in conjunction with the MADI coaxial connections.

The three optical ADAT allow for up to 24 outputs at 44.1 / 48 kHz, (for example a combination of microphone inputs, MADI signals and AVB signals), or 12 outputs at 96 kHz sample rate, providing compatibility with a wide range of audio interfaces straight out of the box.

Equally, all 12 channels can be recorded at 192 kHz via the on-board MADI coax connection (and/or MADI optical), whilst the 2 AVB ethernet ports allow for fully redundant 192 kHz operation, with up to 128 channels of audio in both directions.

As previously mentioned, the 12Mic’s multiple layers of redundancy make it a perfect choice for live sound. Alongside the two fully redundant network ports and MADI I/O, the 12Mic also features a secondary DC power supply connection with a twist-lock mechanism, which can be used alongside, or instead of, the standard IEC connection.

Both power inlets are internally monitored, with the 12Mic displaying a (red) warning light when PSU redundancy is activated, but only one power supply is active. 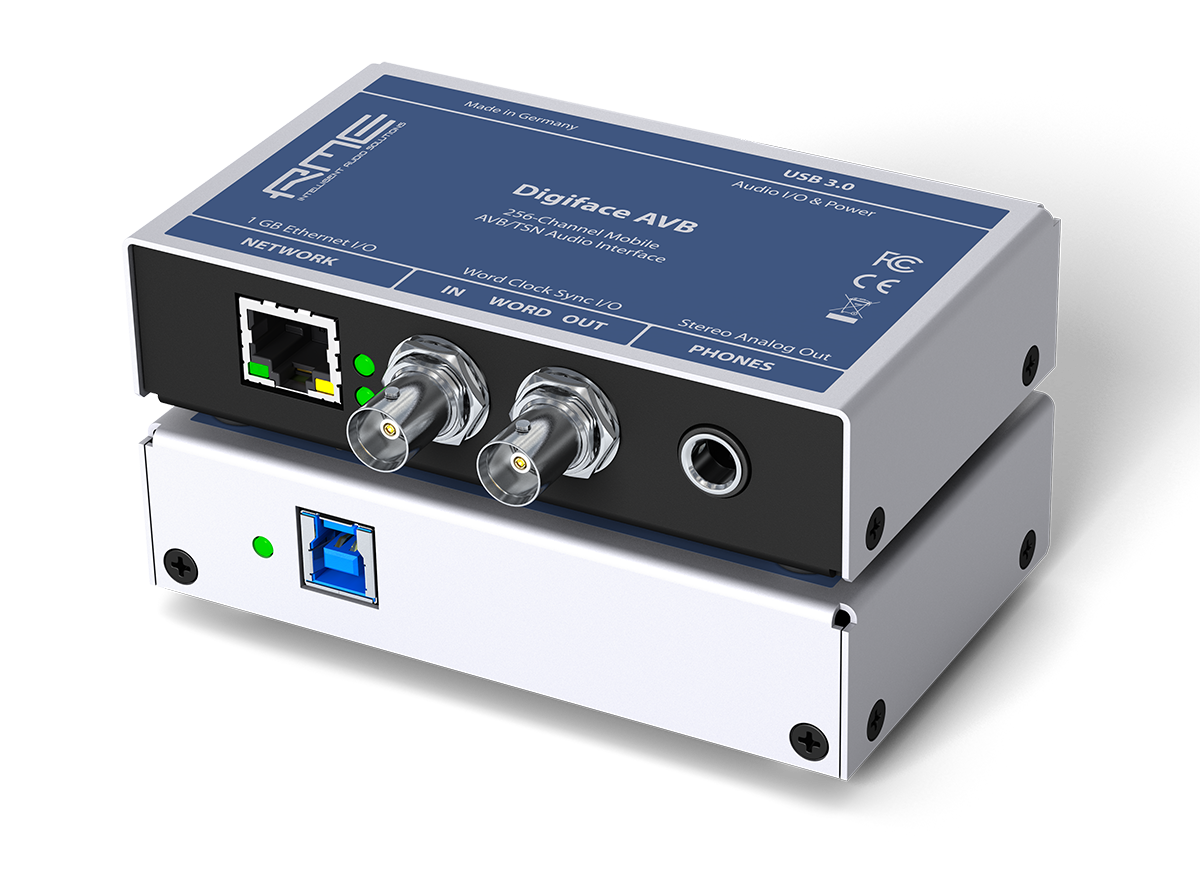 Along with the front panel control, the 12Mic can also be controlled via RME’s free browser-based Web Remote. This simple interface provides an easy method for making adjustsments to any of the input channels – gains, 48v phantom power, and switching between the XLR and TRS inputs.

Channel routing is also incredibly easy – simply click and drag an input to an output – and can be accessed from any location on a network.

Finally, when paired with the RME Digiface USB, the 12Mic can be easily managed via RME’s AVB software controller, or via other third-party AVDECC controllers such as Hive.

The RME 12Mic also features RME’s SteadyClock FS, the latest iteration of the company’s incredibly accurate digital clocking and filtering technology, that supresses jitter values down to the femtosecond.

With accurate clocking an essential element in digital audio, digital audio signals are reliant on the clocking frequency for the correct representation of both the audio bits and sample time reference – with SteadClock FS, the result is a recording with more detail and definition that replicates the source material to its fullest depth and clarity.

The RME 12Mic can be paired with any of RME’s professional audio interfaces,
including for adding an additional 12 mic pres to the 188-Channel RME Fireface UFX+ (via MADI).
Of course, multiple 12Mics can be daisy-chained together for even more channels!

For existing RME users, the 12Mic will make for a fantastic addition to any RME-based recording or live setup.

Thanks to the inclusion of ADAT outputs and MADI I/O, the 12Mic can easily be connected to any of RME’s professional audio interfaces – for example, pairing the 12Mic with RME’s flagship Fireface UFX+ would make for an incredibly powerful recording setup, connecting via MADI to provide a total of 16 high-end mic pres in only 2U of rack space.

For studios, live rigs or installations that require even more channels, multiple 12Mics can also be daisy-chained together via the MADI connection.

When paired with an AVB-capable interface, such as the RME Digiface AVB, the 12Mic offers even more flexibility, becoming a key component in any modern AVB-based setup. The RME M-32 Pro AD and DA, RME AVB Tool, and the upcoming RME M-1610 Pro all feature AVB capabilities – as such, it’s now possible to build yourself a next-generation, RME-based audio networking setup – one that will no doubt come to define the next decade of professional audio production.

Find out more about the RME 12Mic