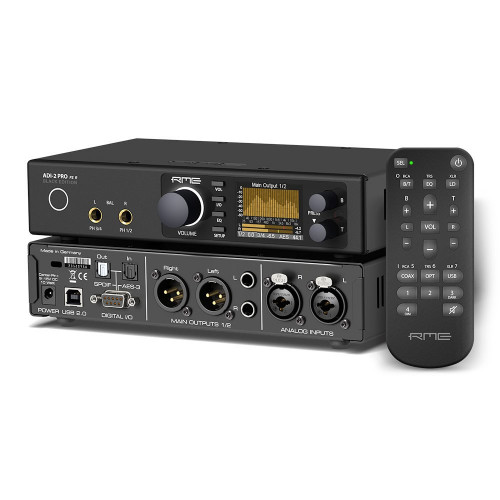 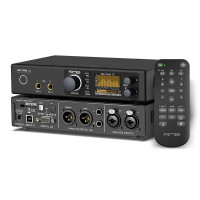 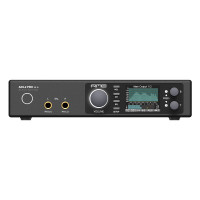 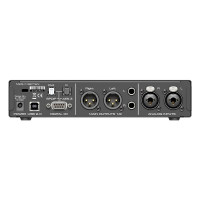 The ADI-2 Pro is RME’s reference AD/DA converter, USB DAC, USB interface and headphone amp. It’s numerous use cases make it an ideal choice in many fields, from the home user appreciating innovative solutions offering highest sound quality, the studio owner asking for reference AD/DA conversion, the Hi-Fi enthusiast demanding a flexible yet high-end headphone amplifier, up to the industry using the portable device as front-end for measurement systems.

A New Experience in Sound and Quality

RME’s reference AD/DA converter is a host of devices all put together into one unit, with a simple and mostly automated way of using it right out of the box. A unit with the industry’s biggest footprint per feature ratio, excellent tech specs, crystal clear and transparent sound signature, and two extremely powerful headphone outputs.

This universal set of I/O options offers superior quality and flexible connectivity to those who take a no-compromise approach to audio.

The USB 2.0 port is fully Class Compliant (UAC 2) for connection with compatible iOS devices, and is also used for firmware updates. Including an external switched power supply with lockable connector, the ADI-2 Pro can be easily powered from battery, opening up mobile applications as well as galvanically isolated use cases.

Compatibility with Mac OS X comes right out of the box. Under Windows the ADI-2 Pro uses RME's MADIface series driver, for full WDM and ASIO compatibility and highest performance.

Aiming for the absolute reference sound, any detail in the ADI-2 Pro is special and has its own story. The main PCB is an extraordinary 10 layer design with custom copper thickness, guaranteeing finest undisturbed sound as well as ample but separated power for the phones outputs.

The whole analogue circuit design is fully symmetrical and balanced throughout - and DC-coupled. The only capacitors in the signal path perform DC protection at the analogue input sockets, and have been carefully selected to avoid any sonic impact.

For easy operation a high quality Sample Rate Converter has been added, switchable to the AES or SPDIF input, solving any clocking problem between those. And RME’s latest SteadyClock FS technology ensures perfect jitter reduction and stable clocking, no matter if internal or external clocks are used.

There is no use in boasting about -110 dB THD, when such values are not available in real world operation - for example when a 32 ohm headphone is connected. RME's engineers therefore designed a new headphone output stage that brings the full performance of the premium DAC to the phone jack - even when using low impedance headphones.

The Extreme Power design excels with 0.1 Ohm output impedance, a maximum output level of +22 dBu, and a maximum output power of 1.5 Watts - per channel! The two, fully separated stereo headphone outputs deliver the same 120 dBA SNR performance as the line outputs, for a full hum and noise free listening experience.

THD is far below -100 dB (0.001%) even at full power, for the most clear and detailed soundstage possible. The Extreme Power design also incorporates current limiting, power surveillance, overload detection and DC protection. A low power mode and a high power mode are provided, for a perfect match from IEM up to planar.

Having two stereo outputs, balanced headphone operation is possible. As RME's engineers were not satisfied with the existing techniques they developed a new Advanced Balanced mode for the ADI-2 Pro, that removes most limitations of standard balanced operation, and turns this mode into a a fully new experience.

TRS
As input XLR, but:

Balanced Phones mode
As before, but:

Please note that the following reviews relate to the original RME ADI-2 Pro FS (released in 2016).

The updated RME ADI-2 Pro FS R (Black Edition) has the same feature-set as the original, with the addition of improved AD/DA converters, remote control operation and an all-black finish. 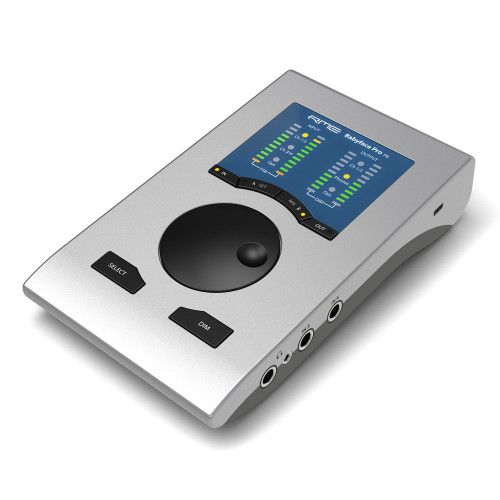 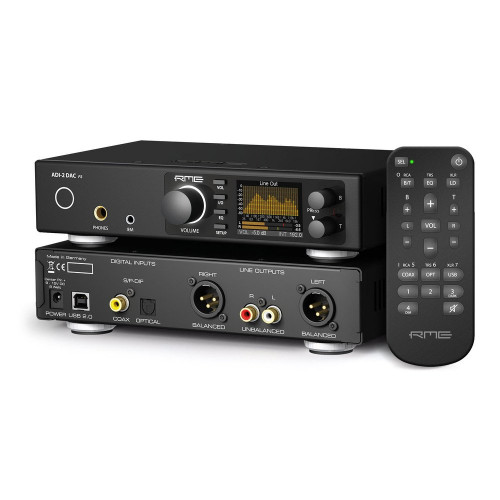 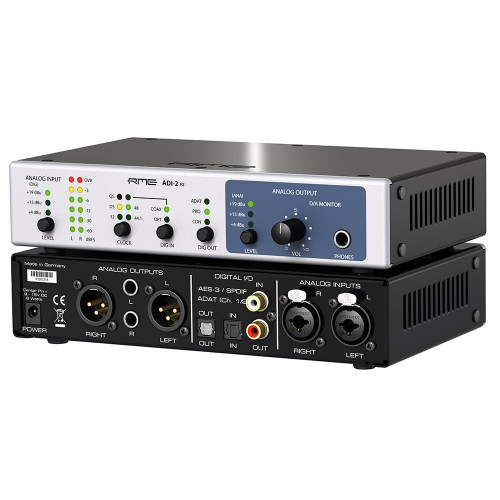 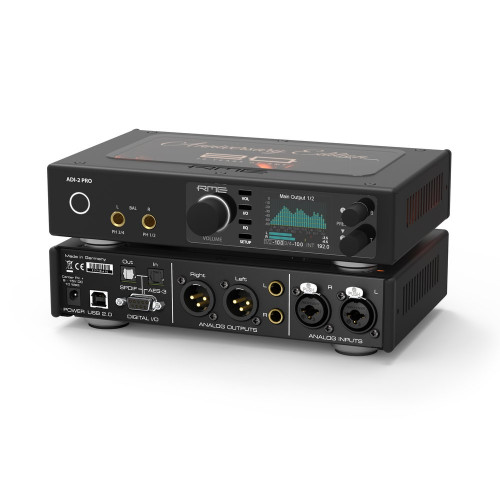 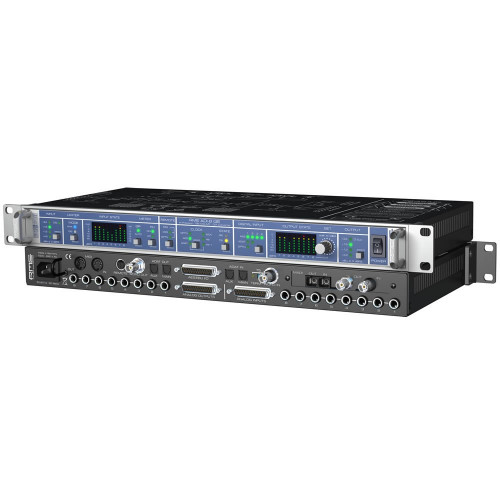 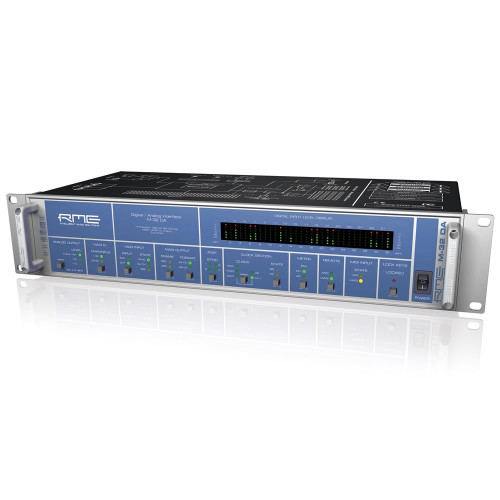 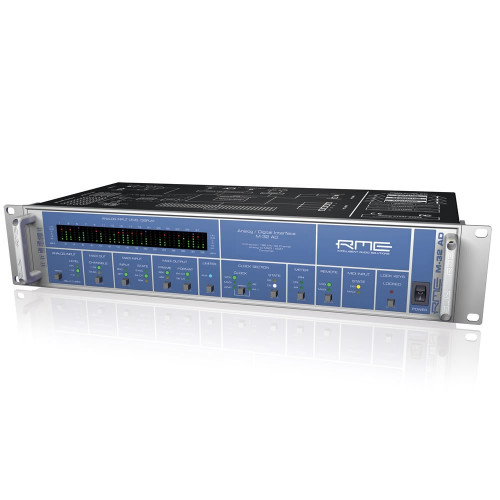 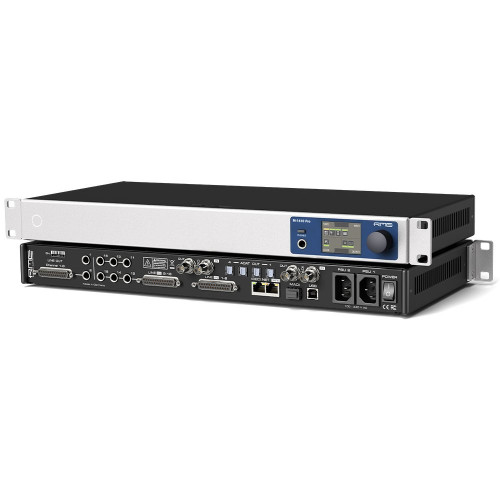 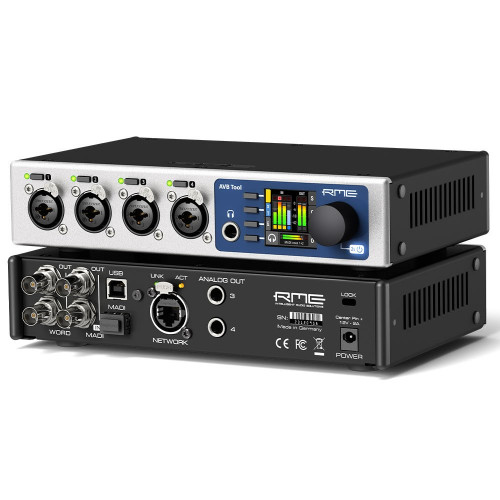