Temple University rely on Ferrofish A32 for College Sports Broadcasting 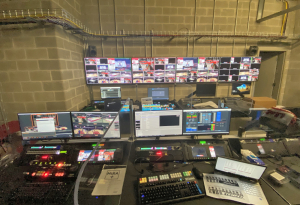 For their season-opening broadcast of the American Athletics Conference in December 2020, Temple University used the Ferrofish A32 AD/DA Converter to handle analogue audio sources at a variety of sports events.

Kevin Hession, Temple University’s director of video production and broadcast engineer, needed a versatile and reliable solution for converting analogue audio sources — specifically for natural sound microphones during their basketball, volleyball and gymnastics productions broadcasted live on ESPN. After partnering with Alpha Video out of Minneapolis, Hession and his team selected the Ferrofish A32 AD/DA converter as their weapon of choice for tackling the job.

With 32 balanced inputs and 32 balanced outputs as well as ADAT and MADI I/O, the A32 packs an incredible amount of connectivity into a 1U 19” rack form factor. On the analogue side, all 32 inputs and 32 outputs are available on D-Sub25 TASCAM pin-format connections, whilst the 4 ADAT ports in both directions can operate at up to 192 kHz via S/MUX.

For those who require a network-ready converter, Ferrofish have designed the A32 Dante. The A32 Dante features all of the I/O of the A32 but with the addition of Dante-networking capability. The A32 Dante is the perfect box for a wide range of broadcast and live audio applications, which is something we’ve dived into in our recent overview video.

“By using the A32, it easily allows me to focus on the actual production rather than having to constantly troubleshoot any potential audio faults,”

Alongside digital ADAT connectivity, the A32 features MADI in both coaxial and optical formats. Both MADI formats can work independently for full channel count transmission, or they can work as a redundant pair with automatic switching in case of signal loss.

Along with redundant power supplies, the range of connectivity makes the Ferrofish A32 an incredibly capable box for applications across live music, studio recording and even broadcast scenarios.

This connectivity is something that Kevin Hession and his team at Temple University required for their first broadcasts of the American Athletics Conference, and the A32 became an invaluable device in their broadcast setup.

“We wanted as much functionality as possible to still be able to use analogue audio when necessary,” Hession said, adding that the A32 converter is routed to a full patch bay. “We’re then able to patch those sources to the necessary destinations.”

Routing is something that the Ferrofish excels at, with its built-in routing matrix allowing for any input to be routed to any of the output channels in blocks of eight channels. This easy-to-use routing system is something that Hession and his team would employ for sending the analogue microphone feeds to and from their digital mixing console.

Hession and the broadcast team then convert the audio to MADI and send it to a 64-channel digital mixing console. “The audio ecosystem we implemented makes audio routes incredibly simple,” he added. “The A32 gives us a ton of flexibility with that.”

“An outside AV company came in to do any in-house audio, and all we had to do was connect their mixdown to the A32, and we had crystal clear audio,” he explained. “It was as simple as that.”

Watch our overview video for the Ferrofish A32 Dante 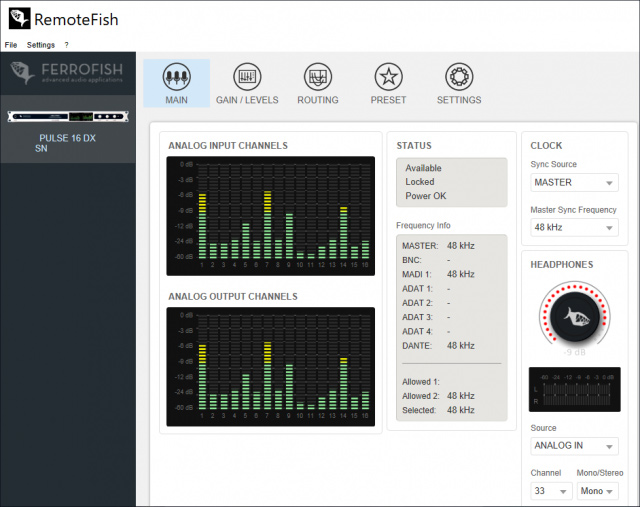 Aside from its universal functionality, Hession said another key feature when selecting the A32 converter was its ease of use.

“By using the A32, it easily allows me to focus on the actual production rather than having to constantly troubleshoot any potential audio faults,” he said. “If we want another audio source, or even if our broadcast talent just wants a different analogue source we’ve set up, it takes less than four clicks.”

The user interface of the A32 has been designed with rapid interaction in mind. The four TFT displays make it simple to get detailed level information at a glance, with all 32 inputs and 32 outputs displayed at all times.

The menu systems and routing matrix are all simply laid out, offering quick control of clocking, gains, routings and other settings from right within the device. When paired with a PC or Mac and Ferrofish’s RemoteFish software, the A32 can be controlled remotely via USB, MIDI or MIDI-over-MADI. This makes it possible to create routings and program settings without using the internal menus and then store these using the six preset slots available on the A32.

You can learn more about RemoteFish in our video overview. 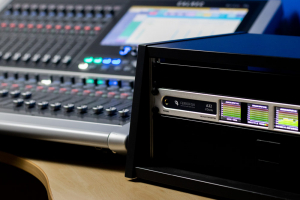 Offering the flexibility for connecting, routing and converting audio signals, the A32 is a fantastic unit for high-end multi-format converting for broadcasting. As if the available I/O on the A32 was not already for most broadcast needs, Ferrofish also offer the network-ready A32 Dante.

Adding a further 64 channels of audio via Audinate’s Dante protocol to the already impressive MADI, ADAT and analogue offering, the A32 Dante is a device perfectly suited to a multitude of live and broadcast applications. With its remarkable amount of I/O, the A32 Dante is perfectly suited as a breakout box for a broadcast mixing console, as well as being small enough to fit into a location recording rig or Outside Broadcasting setup.

We recently spoke with A32 Dante user Rob Ashard who has had the pleasure of working as the sound supervisor on some of the UK’s biggest Saturday night TV productions.You can read our interview by clicking here.

To see the full range of Ferrofish AD/DA converters, here.