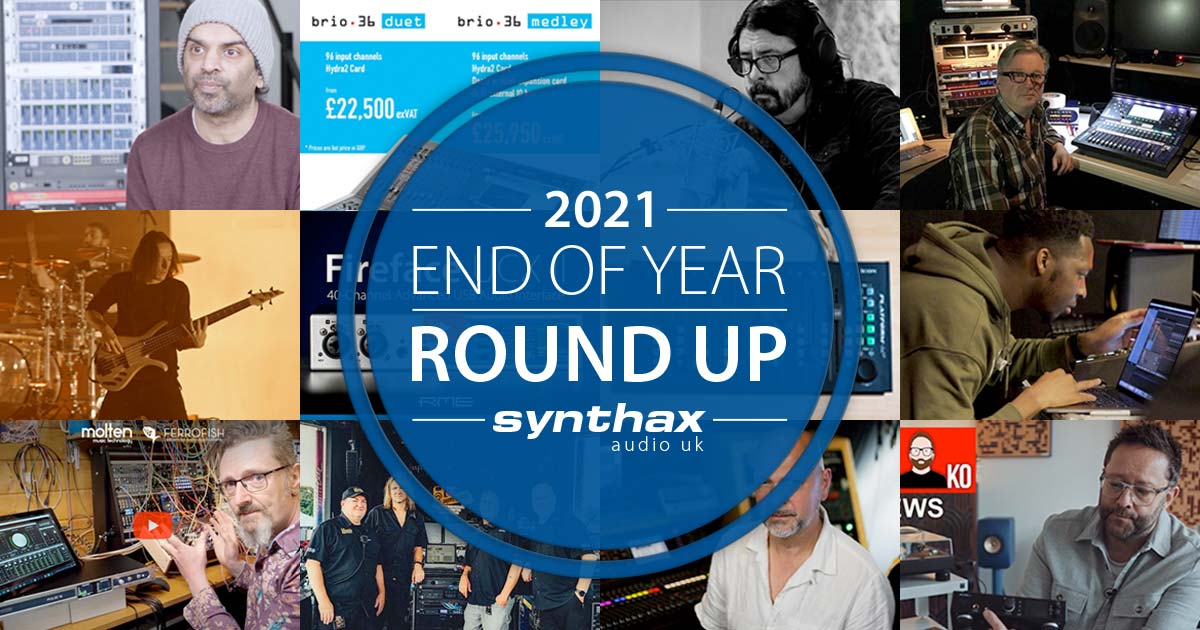 A Round Up of some of our favourite news, tutorials, blog posts and videos of 2021

There’s no doubt 2021 has been yet another disruptive year for us all, particularly our friends working in event production and live sound. Despite the continued uncertainty of the pandemic, we were fortunate to get out and film with a few of our customers in between restrictions. We also had a couple of exciting new product launches – and some great reviews to match – not to mention rounding off the year with a Sound On Sound GOTY Award, and a Product Of The Year shout-out from Production Expert.

Here’s a round-up of some of our favourite news, stories and videos from 2021. A huge thanks to all of brands and partners, and of course all of our customers! 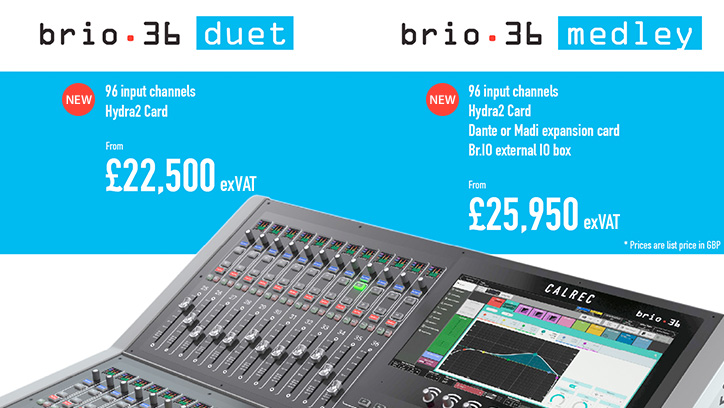 Calrec’s Brio console got a boost with the announcement the Brio Duet and Brio Medley packages, offering greater channel counts and expanded connectivity as standard.

As the UK distributor for Calrec’s Brio and Type R consoles, we’ve been supplying the Brio to broadcast engineers for a number of years now – get in touch

if you want to know more about these powerful, broadcast audio consoles. 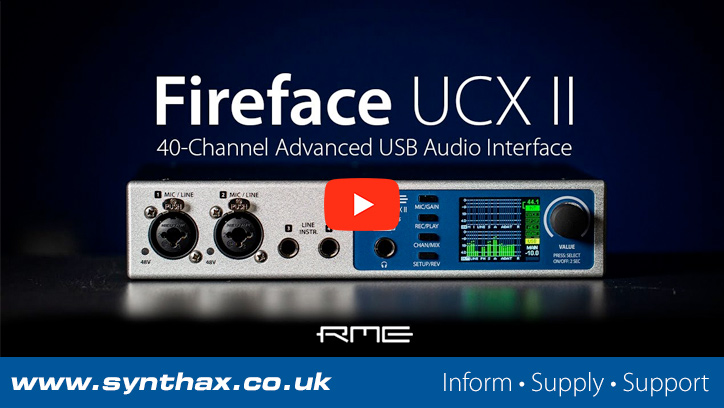 Back in June 2021 RME released the Fireface UCX II Advanced Audio Interface, the long-awaited update to the popular Fireface UCX, and which Production Expert have named one of their ‘Products of the Year 2021’.

Cramming a massive 40 channels of I/O into a single 1/2U frame, the UCX II combines the latest AD/DA converters and SteadyClock FS with RME stalwarts like TotalMix FX, TotalMix Remote and DIGICheck, plus new standalone multi-track recording courtesy of the ‘Advanced DURec’ functionality. 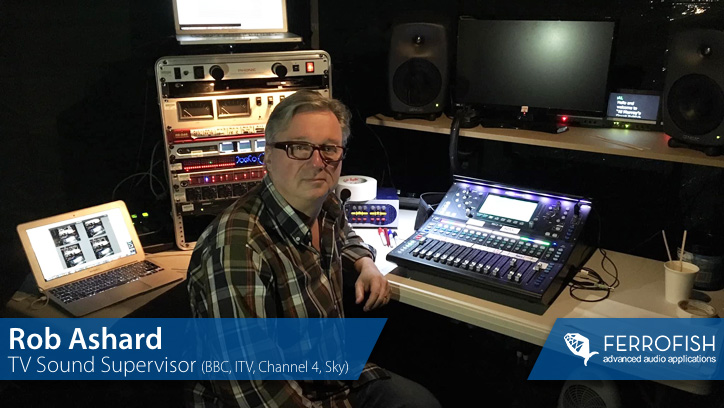 Rob Ashard is a Sound Supervisor who heads up the sound for a number of the UK’s best-loved Saturday night entertainment shows, including The Graham Norton Show, Ant and Dec’s Saturday Takeaway and I’m A Celebrity…Get Me Out Of Here!

Rob was kind enough to speak to us about his portable recording rig which includes the Ferrofish A32 Dante – a professional 32-Channel AD/DA converter that has become particularly popular in broadcast audio – as well as giving us a real insight into his approach when recording and mixing TV productions with a live audience. 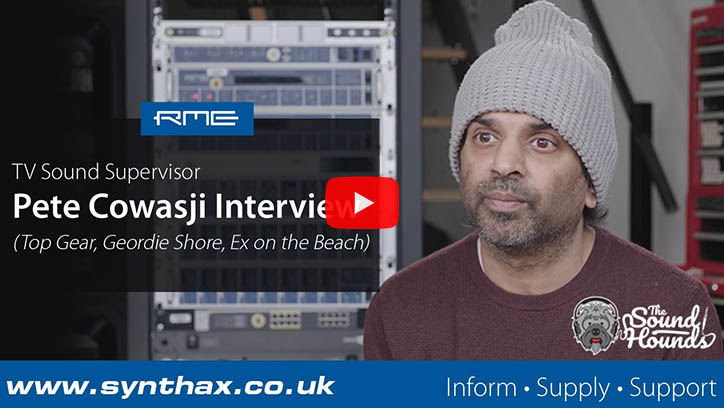 Pete Cowasji and the RME DMC-842

Pete Cowasji is a Sound Supervisor and founding member of The Sound Hounds, a collective of sound recordists working across some of the UK’s most popular reality TV series. From shows like BBC’s Top Gear to MTV’s Geordie Shore and Ex on the Beach, Pete and his team have provided location recording equipment for some of the biggest names in British TV.

Working on large TV productions comes with its own unique set of problems, so we sat down with Pete to find out about the extensive RME kit list he’s acquired during his career – including his recently added 4 x RME DMC-842s. 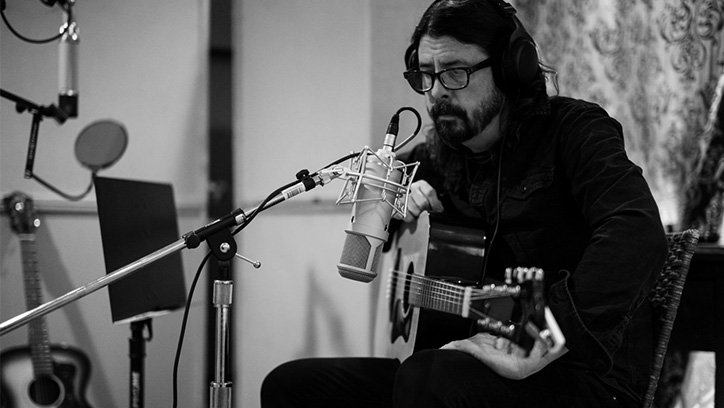 A collection of Lauten Audio microphones were used by Grammy Award-winning Engineer Darrell Thorp during the recording of Foo Fighters’ tenth studio album “Medicine at Midnight”.

Recorded entirely inside a holiday rental home in Encino, California, the unique recording setup surrounding “Medicine at Midnight” came to life after frontman Dave Grohl spent time in “the Encino House” writing and recording demos. The sound of the 1940s house would soon become a key component of the recording process for the album. 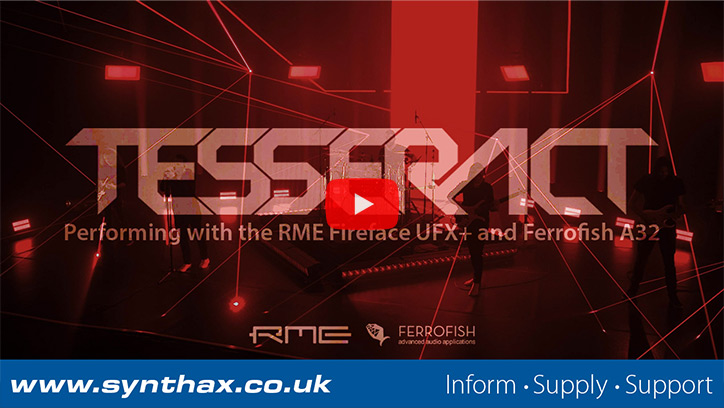 TesseracT with the RME Fireface UFX+ & Ferrofish A32

Half concert, half film, TesseracT’s PORTALS combined full arena-style live musical performances – complete with stunning lighting and visual effects – with a conceptual storyline, allowing the band to deliver the full live concert experience to their fans during the coronavirus lockdown, and taking the live-stream format to new heights.

With Tesseract long-time users of RME both in the studio and on tour, we were keen to get the thoughts of bass player Amos Williams, who kindly told us about how the concept for PORTALS first came about; what the band are planning next; and why TesseracT rely on hardware from RME Audio and Ferrofish for their live performances. 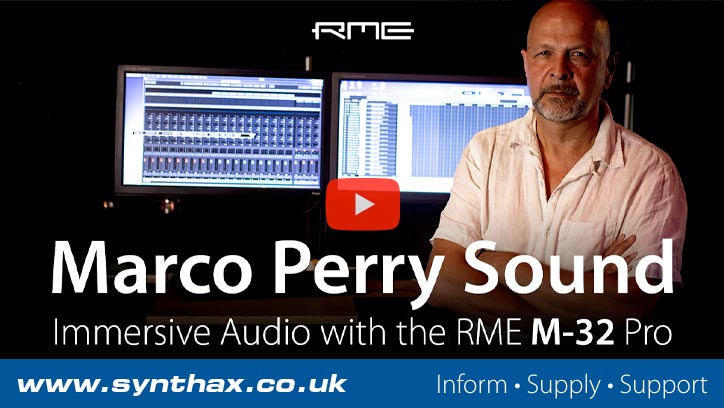 Working from within his “Sonic Shed” – an old industrial structure hidden behind a grade II listed building in Wandsworth, South-West London – Marco Perry creates experiences. Blending unique animations and visuals with atmospheric sonic and musical collages, his compositions are mixed and played back via specially designed immersive audio installations – a way of experiencing music that Marco himself has been championing for over a decade.

We joined Marco in the Sonic Shed to find out more about his passion for designing and mixing spatial audio installations, as well as to hear more about the many pieces of RME gear he’s used over the years, which includes a large number or RME’s multi-channel AD/DA Converters. 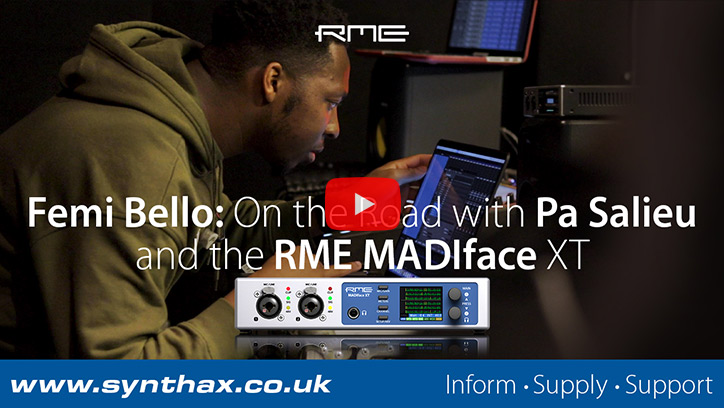 Having already worked with some of the biggest names in the UK Rap and Grime scene, Femi Bello has been behind the desk as an FOH and monitor engineer for the likes of Little Simz, Central Cee and Headie One. And at this year’s Reading and Leeds festivals, Femi was the engineer behind UK artist Aitch’s Main Stage debut.

We met up with Femi at John Henry’s in North London, on the last day of production rehearsals for rapper Pa Salieu’s headline UK tour, to chat about getting started in the live sound industry; working with some of the biggest rap artists in the UK; and how the RME MADIface XT has become an invaluable addition to his setup. 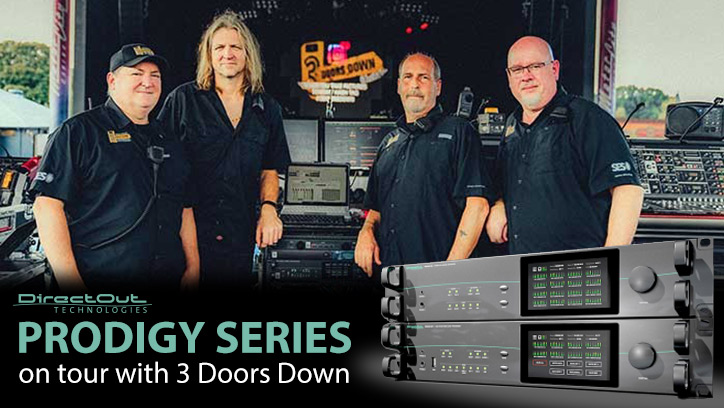 DirectOut PRODIGY Series on tour with 3 Doors Down

Earlier this year American rock band 3 Doors Down embarked on a 4-month “20th Anniversary Tour”, in celebration of 20 years since the release of their first studio album “The Better Life”. Featuring the hit singles “Kryptonite” (the song that launched the band’s career) and “Be Like That”, a version of which featured in the soundtrack for the film American Pie 2, the album went on to sell over 6 million copies worldwide.

Production for the tour was handled by the North Carolina-based Special Events Services, who deployed their new d&b audiotechnik KSL rig alongside a pair of DirectOut PRODIGY.MP and PRODIGY.MC converters. 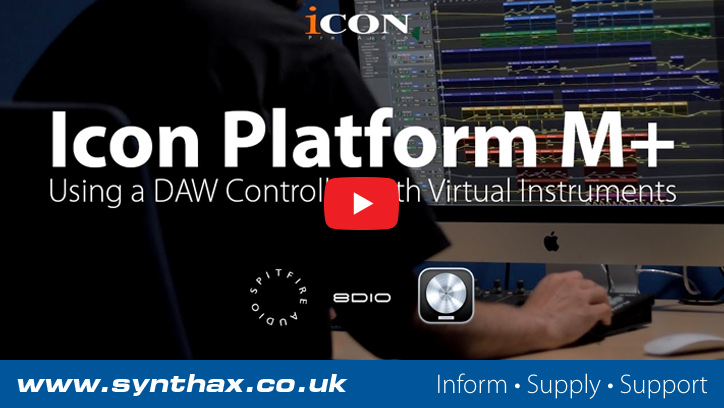 Compact and versatile, the Icon Platform M+ is the perfect DAW Controller for small studio and home setups, offering tactile control of a wide range of Digital Audio Workstations.

Whilst primarily designed for mobile mixing and recording, the Platform M+’s use of MIDI means it can also be used for a range of other applications, including as an expression controller for virtual instruments. 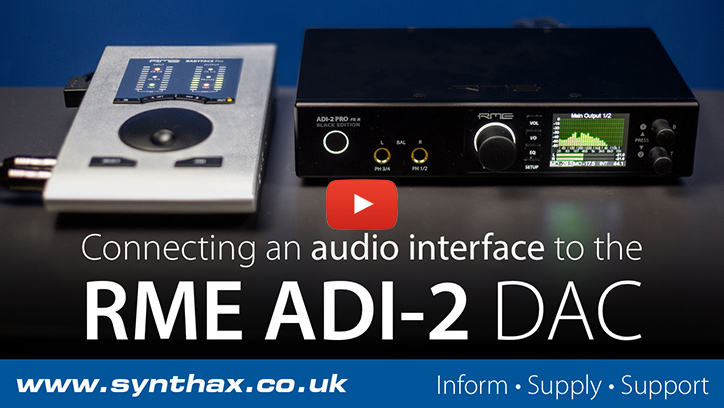 A popular request with our YouTube subscribers, in this video we outline the easiest way to combine an RME ADI-2 DAC or Pro FS R with an audio interface, taking advantage of the incredible ADI-2 conversion for one seriously high-quality recording and monitoring setup. 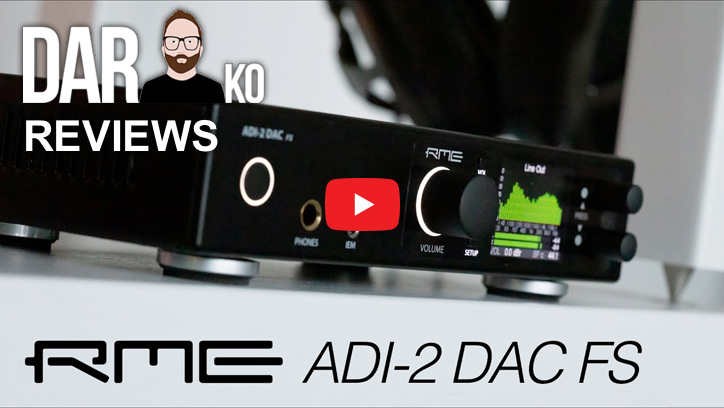 The RME ADI-2 DAC FS has quickly become one of the most popular products we supply, despite being something of an outlier for a manufacturer traditionally found in ‘pro’, rather than ‘home’ or ‘domestic’ audio.

Quite honestly we could have probably picked any review to showcase here – the DAC has been that well received by the Hi-Fi community! This one comes from the highly respected John Darko of Darko.Audio, who we were thrilled to see giving the DAC his own stamp of approval, calling it “the DAC to beat under 1000 euros”. 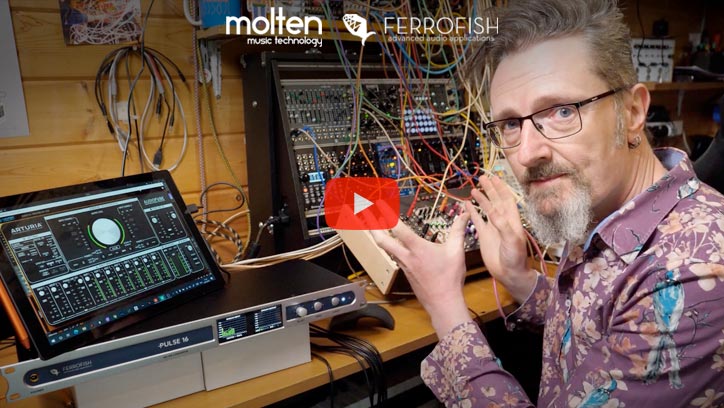 Robin Vincent’s website and YouTube channel is home to anything and everything modular synthesis. From module reviews to performance patches and even DIY builds, Molten Music Technology is a fantastic resource for anyone looking to get into the world of modular synthesizers and voltage-controlled analogue gear.

In this video review of the Ferrofish Pulse 16 CV, Robin pairs Ferrofish’s DC-coupled output AD/DA with Bitwig Studio, whilst demistifying the process of sending CV and Gate messages from a computer to a modular rack setup. 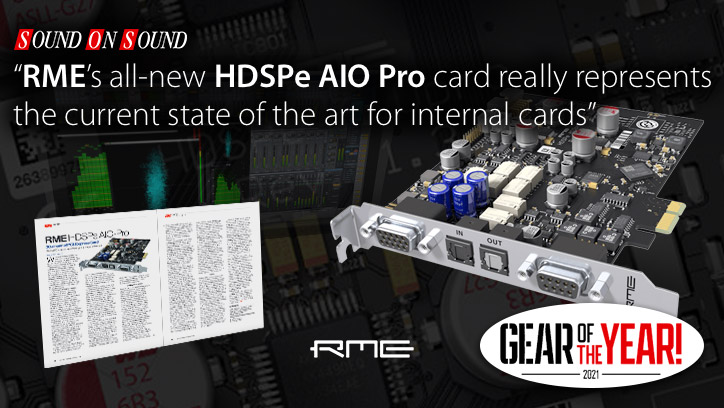 The RME HDSPe AIO Pro is the latest and greatest PCIe sound card from RME. Taking the reference-class AD/DA converters of the ADI-2 Pro FS and re-housing them into a cutting-edge PCIe card, this 30-channel powerhouse combines the finest RME sound quality with frighteningly low latency values.

“I can’t recommend it highly enough,” says reviewer Hugh Robjohns of the AIO Pro, who went on to give it his Editor’s Choice Award in Sound On Sound’s ‘Gear Of The Year’ Awards 2021!

So, another year comes to a close. Once again a massive thanks to all of our customers, brands and partners, we wouldn’t be here without you. Best wishes for the holidays, and fingers crossed we can get out there and visit more of you again in 2022. See you all on the other side!

If you’d like to know more about any of the pro audio solutions produced by RME, Ferrofish, Calrec, DirectOut, Appsys ProAudio, Icon Pro Audio or Lauten Audio, give us a call on 01727 821 870 to speak to one of our team or to arrange a demo.